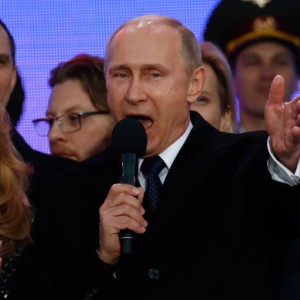 In Moscow, tens of thousands of citizens attended a celebration led by Vladimir Putin of the one year anniversary of Crimea’s annexation from Ukraine, during which the President stated, ‘Russia has always believed that Russians and Ukrainians are one people. I still think so now.’  A Moscow design studio has unveiled a new Crimea logo specially for the anniversary.  Amnesty International has also marked the occasion with a report noting that Crimean residents’ rights to freedom of expression, association and assembly have dramatically deteriorated under Russian rule.  ‘Meanwhile, as Russia celebrated one annexation, it appeared to pave the way for another,’ says the Guardian: President Putin has signed an ‘alliance and integration’ pact with South Ossetia, the Moscow-backed breakaway region of Georgia, which the European Union argues ‘clearly violates Georgia’s sovereignty and territorial integrity.’  Sweden is concerned that one third of the Russian diplomats based in the country are spies.  Russia has plans to ban more than 200 politicians and officials from the European Union and the United States from entering the country.

The Boris Nemtsov murder has revealed the cracks in Vladimir Putin’s relationship with Chechnya, argues Ivan Sukhov in the Moscow Times.  RFE/RL’s Brian Whitmore concurs, suggesting that in the Nemtsov investigation the President may have had to choose between Chechen leader Ramzan Kadyrov and the FSB, and favored the former.  The Russian Supreme Court has upheld the sentences of two opposition activists, Sergei Udaltsov and Leonid Razvozzhayev, for their involvement in 2012’s Bolotnaya Square protests.  Advocacy group For Human Rights has been fined $4,850 for refusing to register as a foreign agent.  Raising comparisons with Sergei Magnitsky, billionaire and opposition activist Gleb Fetisov is reportedly suffering extreme ill health whilst in pre-trial detention on fraud charges.

Beleaguered by the recession, General Motors Co. plans to close its Russian factory.  The fall in the ruble saw net profits for Russia’s biggest iron ore producer, Metalloinvest, drop 94% in 2014.  Reports have surfaced that Russia may postpone completion of the mammoth ‘Power of Siberia’ pipeline to bring gas from two new fields to China, until the Altai project is completed.