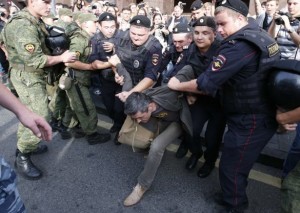 Up to 6,000 people have gathered in Moscow in unauthorised protests against the sentencing of opposition leader Alexei Navalny to five years in jail.  Numbers vary, but it has also been reported that as many as 150 people have been detained in the marches which have blocked off a central Moscow square.  Up to 40 different pro-Navalny rallies and events are expected to take place in the capital today.  RFE/RL is following the events closely with a live blog.  At least two protesters were also briefly detained outside the court in Kirov where he was sentenced (click here for a video report).  Following the verdict Navalny’s wife, Yulia Navalnaya, offered a statement in which it was pledged that his foundation would continue its work.  The BBC offers an analysis of the Russian media coverage of the event.  Whilst reactions to the verdict have been marked by a sense of grim inevitability, in a surprising twist Navalny has been released from custody one day after sentencing in what one lawyer has termed ‘an extremely rare case‘.  Prosecutors apparently said that because Navalny is a candidate in the Moscow mayoral race, keeping him in custody would deny him his right to seek election.  Meanwhile his campaign office has told the press that he will withdraw on the basis that as ‘it is not an election, there is no point in taking part’.

International reactions to the verdict have been condemnatory, with the U.S. announcing it was ‘deeply disappointed‘.  The  E.U. has argued it raises ‘serious questions’ about the impartiality of the Russian legal system.  High Representative Catherine Ashton concurs, stating that the charges against Navanly were never substantiated during the trial.  Reactions at home have also been damning, with ex-Finance Minister and Putin ally Alexei Kudrin, stating, ‘The verdict against Navalny looks less like a punishment than something intended to isolate him from public life, [and] the election process.’   The Guardian and the Washington Post have a list of the opposition figures in jail or awaiting trial. ‘Russia has joined the list of countries with an imprisoned opposition leader. The worst-case scenario is, in fact, here’.   The president’s Human Rights Council may examine the Navalny case, perhaps at their peril; former chief Ella Pamfilova is apparently being questioned by the Investigative Committee for her role in drafting a report recommending that Mikhail Khodorkovsky be released.

The markets have reacted nervously to the news, with shares sinking the most in one month on the back of the verdict. Russia’s WTO wrangle over an auto recycling fee program looks to deepen as the U.S. joins Europe in the case against Russia.  The White House remain opaque on whether a fall summit between President Barack Obama and President Vladimir Putin in Moscow will be cancelled due to disagreements on Edward Snowden.  Tensions will not however scupper a $550 million helicopter deal between the Kremlin and the Pentagon.  Journalist Masha Gessen talks to the BBC about her decision, as a gay parent, to leave Russia.

PHOTO: Police officers detaining a pro-Navalny protester during an unsanctioned rally near the Kremlin on July 18, 2013. (Grigory Dukor / Reuters)