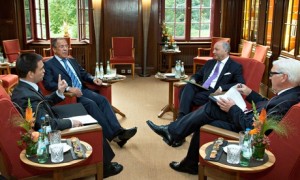 Dozens of civilians, including children, were killed yesterday when a convoy carrying refugees was hit by rocket fire near the eastern city of Luhansk.  Pro-Russian rebels and government forces blamed each other for the attack, which occurred between the towns of Svitlivka and Khrashchuvate.  Fifteen bodies have so far been recovered from the wreckage.  Talks in Berlin between the two countries’ foreign minsters have failed to yield a ceasefire.  Nonetheless, ‘behind the rattling sabres, the Russians appear to have stepped up their efforts to reach some diplomatic resolution‘, says analyst Mark Galeotti.  Could a resolution depend on military advances for leverage?  Rock star Andrei Makarevich of Time Machine has been branded an enemy of Russia after performing for IDP children in Donetsk Oblast and openly criticising the Kremlin’s policies in Ukraine.  Crimea’s political integration into Russia should be sealed with local and parliamentary elections taking place in September, says the Crimean Ministers’ Council.

Although Norway has recently joined Europe in sanctions against Russia, the country’s energy major Statoil will cooperate with Rosneft in oil and gas exploration off Norway.  ‘If you focus on the long term, you have potential to make a lot of money‘: despite all the turbulence, some Western investors have not been deterred from investing in Russia.