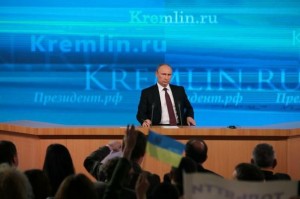 More than 1,300 journalists have been accredited for President Putin’s ninth annual marathon news conference, where he will take questions from Russian and foreign media.  The Moscow Times has a live blog following the event, which is currently underway.  The issue of Ukraine has already been raised, with Putin arguing that the decision to reduce gas prices for Kiev was motivated by a desire ‘to help the brotherly country‘, as opposed to aggravating the E.U.  He added that Russia’s offer of a temporary 33% discount may be extended for the long term.  The President has also asserted that mayoral elections will not be abolished.  The Sochi Olympics, believed by this commentator to be key for Putin’s political legacy, is also likely to figure in the discussion.  Human Rights Watch reports that the Russian authorities have stepped up harassment of critics of the Winter Olympics preparations.  Moldovan President Nicolae Timofti will not attend the Games.

Yesterday’s dramatic news that Pussy Riot and the Arctic 30 will be freed under a new amnesty has been described as ‘a classic PR masterstroke‘ which ‘soothes international opinion, while keeping those who pose a real threat to his regime firmly behind bars’.  Amnesty International agrees that it will do little to help those who have been ‘wrongfully convicted‘.  Meanwhile a trial date has been set for two Bolotnaya Square activists who will not be freed.   Mikhail Khodorkovsky will also remain behind bars.

President Putin has fired Ground Forces commander Vladimir Chirkin, after the Investigative Committee charged the lieutenant general with bribe-taking.  Despite reports to the contrary, Putin says that Russia has not deployed Iskander tactical nuclear missiles in Kaliningrad.  Shaun Walker argues that the President is ‘likely to feel rather pleased with himself at the way his foreign policy initiatives have gone in 2013′.  Presidential spokesman Dmitry Peskov believes Russia needs more propaganda.