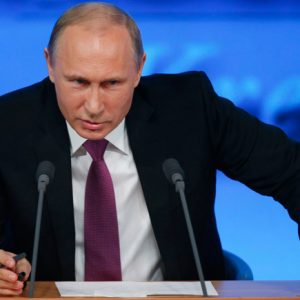 ‘Sometimes I wonder, maybe the bear should just sit quietly, munch on berries and honey rather than chasing after piglets, maybe then, they would leave it alone? But no, they wouldn’t, because they will always try to chain it up.’  Putin’s annual Q&A with journalists offered his habitual colourful metaphors and a robust defence of Russian interests abroad, as well as the country’s ailing economy.  On the latter, the President expressed confidence that the economy will recover in two years.  ‘His words are unlikely to terrify the market, but probably won’t massively reassure it either’, says the Guardian’s Shaun Walker.  The Independent notes that the rouble ‘strengthened after he began speaking‘, indeed it remained relatively stable during the speech.  Putin denied that he had any responsibility for the Ukraine crisis and affirmed his hopes that the situation would be resolved diplomatically, whilst chastising NATO for its expansion eastwards.  He also stated that it was too early for him to say as to whether he would run in the 2018 presidential election.  The Moscow Times has some of the less remarked upon highlights of the presser, not including the much-reported question regarding his love life.   Moscow police detained 19 activists of a group of 40 who wished to ask the President ‘inconvenient questions‘.   This article suggests that some of the questions posed were more assertive than typically seen at the Q&A.

Russia’s lower house of parliament has passed a draft law that would give the banking sector a capital boost of $16.5 billion as part of measures to protect banks from Western economic sanctions.  VEB, for example, will receive $505 million in additional capital.  The ruble has strengthened today after Finance Minister Anton Siluanov confirmed his ministry had sold foreign currency and on expectations that exporters will increase dollar sales.  Defending the ruble has cost Russia around $80 billion this year, but with foreign currency and gold reserves at around $414.6 billion, some are confident it is still well-placed to defend the currency.  ‘Why, if the central bank has $413bn in reserves, is the ministry of finance being called on to put its hand in its pocket for some small change?‘ wonders one analyst.  U.S. President Barack Obama has signed into law a new Russian sanctions bill.

One of the other noted moments of Putin’s Q&A was support for Sistema owner Vladimir Yevtushenkov, recently released from house arrest, whom the President says he will invite to his New Year’s Eve meeting with Russia’s top businessmen.  He also stated that Yukos founder Mikhail Khodorkovsky (to whom Yevtushenkov has been compared) is free to engage in politics.  For others in business, less positive news: the ruble’s fluctuations have seen tycoon Alisher Usmanov lose $809 million in the last 48 hours.