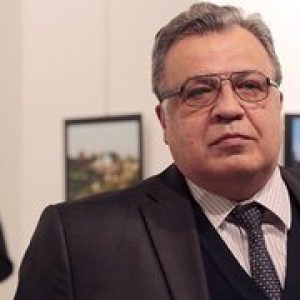 It has been confirmed that Russia’s ambassador to Turkey, Andrei Karlov, has been shot dead whilst giving a speech at an art gallery in Ankara, by a lone gunman who allegedly shouted ‘Aleppo’ during the attack (footage of which is apparently beginning to surface).  The Kremlin has stated that it qualifies the events ‘as a terrorist attack’.   France and Russia have reached a compromise on a U.N. resolution to prevent ‘mass atrocities’ in parts of Aleppo where thousands of civilians await evacuation.  A state of emergency has been declared in the Siberian city of Irkutsk after 48 people died from drinking bath lotion doubling as moonshine; seven people accused of selling the tincture have been detained.

As Moscow woos populist, eurosceptic parties across the continent, it has been announced that a far-right party in Austria, the Freedom Party, has signed a five-year ‘cooperation pact’ with United Russia, to ‘strengthen the friendship and education of young generations, in the spirit of patriotism and of finding joy in work’.   Plans are reportedly afoot to make ‘family values’ lessons a compulsory part of the school curriculum.

The Moscow Times offers its usual round up of the weekend’s news items as communicated by the state channels – noting that top Kremlin propagandist Dmitry Kiselyov says that Donald Trump has already faced a ‘coup d’état’.  The same paper finds that the number of Russians who think media reports are false or biased has doubled in the last 12 months.  Veteran rights campaigner Lyudmila Alekseyeva says journalists from pro-Kremlin NTV television deceived her into thinking that they were from RFE/RL in order to film an interview, which they then doctored.  In 2016, Russia sold approximately $14 billion worth of arms.

PHOTO: The Russian ambassador to Turkey, Andrei Karlov, speaks at a gallery in Ankara. (Burhan Ozbilici/AP)