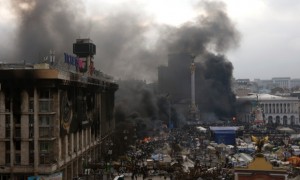 A tentative ‘truce’ reached between Ukrainian President Viktor Yanukovych and opposition leaders in Kiev was quickly broken when nine protesters were shot dead in the space of two hours in Independence Square.  Protesters have apparently now reclaimed the Maidan – see RFE/RL’s live blog for updates.  The Russian Foreign Ministry has blamed renewed clashes on ‘criminal activity of radical elements from the opposition.’  In a telephone conversation with German Chancellor Angela Merkel, Vladimir Putin argued that Western countries (some of which are now threatening sanctions against Ukraine) should stop blaming the country’s leadership.  Foreign Minister Sergei Lavrov has squarely condemned the West’s ‘harmful‘ intervention, as it ‘directly flirts with militants‘, which amounts to a ‘coup d’etat attempt‘.  Deputy Leonid Slutsky of the Duma’s CIS Committee fears the country is ‘on the verge of a break-up‘.

Cossack militia members used whips and teargas to repress Pussy Riot during a anti-Putin performance in Sochi in which recently released members Nadezhda Tolokonnikova and Maria Alekhina took part.   ‘The Olympics have created a space for the complete destruction of human rights in Russia’, the former told reporters.  Sochi investors and businesses are nervous ahead of an audit of the Games in which Vladimir Putin is likely to look for scapegoats for the event’s weaknesses, says Reuters.  The fact that the cost of hosting the Winter Olympics has called into question Russia’s credit rating has reportedly incensed the President.  With plans afoot to buy more foreign currency and violence escalating in Ukraine, the ruble has tumbled to an all-time low against the euro.  Concerns about the Russian economy are mounting thanks to new investment data.  Three men have been sentenced for killing and robbing three gay men in Moscow.

The state duma is mulling legislation that would obligate bloggers whose webpages attract 10,000 views a day to seek official journalist accreditation from the government.