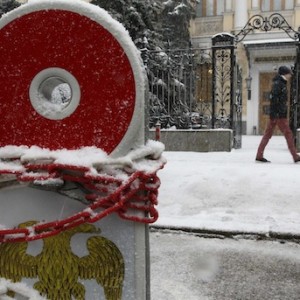 The Central Bank’s First Deputy Governor, Ksenia Yudayeva, has warned it would be ‘premature to say that crisis trends in the economy have been overcome’ given that oil prices remain volatile and sanctions continue.  Despite $20 million in spending cuts, the budget deficit is estimated to rise to 3.2 % of GDP this year.  The dwindling sales of Gazprom, which normally provides one-fifth of federal budget revenue, are an additional worry.  The latest estimate puts Putin’s fortune at a $200 billion, ‘But where’s the proof? Estimates of Putin’s wealth lack even the smallest thread of evidence’, argues this Washington Post blog.  Lower production costs mean that Russia may begin assembling its Sukhoi Superjet regional jet in India.

British Defence Secretary Michael Fallon has raised Russia’s hackles by suggesting the nation poses a ‘real and present danger‘ to Estonia, Lithuania, and Latvia, as Britain scrambled fighter jets to shadow two long-range Russian Bear bombers that were flying near the southern coast of England.  This comes amid a new House of Lords report which suggests that the British Foreign Office’s expertise towards Russia has decreased considerably, and that it dramatically misread the crisis in Ukraine.  ‘Russia is looking to redraw Europe’s 21st century borders by force, and it must be noted that Ukraine is not the first country to face Russia’s aggression’ is the view of the vice president of the European Commission, Valdis Dombrovskis, on Moscow’s intentions.  According to the U.S. State Department, rebels have broken the cease-fire more than 250 times since it went into effect earlier this week, notably in Debaltseve, but a commitment to the truce is still in evidence, this article suggests.  The Kremlin continues to reject calls to deploy peacekeepers.

PHOTO:  A chain is seen wrapped around a road sign for parking, with the coat of arms of the Central Bank seen on it, near the headquarters of the bank in central Moscow, February 19, 2015. (Grigory Dukor / Reuters).