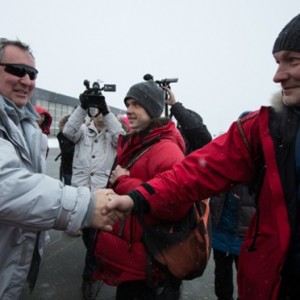 ‘It’s clear that if we don’t start consolidating, they will kill us all, jail us one by one or, in the best case scenario, squeeze us out of the country’: Ilya Yashin explains why the opposition movements RPR-Parnas, led by Kremlin critic Boris Nemtsov up until his death, and the Party of Progress, led by Alexei Navalny, have decided to unite in one block ahead of parliamentary elections in 2016.  Prominent environmental activist Yevgenia Chirikova has fallen victim to the third of Yashin’s prognostications – she has reportedly fled to Estonia with her family in response to ‘repressions against social activists in Russia‘.  With wildfires already raging in some parts of Siberia, environmental experts have warned that the country might suffer a repeat of the devastation of 2010, which they argue could have been prevented with improvements to legislation.  Putin’s envoy to Siberia has blamed the current outbreak on an act of arson by the political opposition.  Exiled businessman Mikhail Khodorkovsky has suggested that the raid on his Open Russia organisation’s offices may have been an attempt to find information about plans for a documentary about Chechen leader Ramzan Kadyrov.  Norway has summoned the Russian ambassador to explain how Deputy Prime Minister Dmitri Rogozin was seen visiting one of its islands, given that he is banned from entering the country under sanctions.

Despite receiving Putin’s attention at last week’s televised Q+A, workers at the Vostochny Cosmodrome have continued their strike against wage arrears in increasing numbers.  The first launch of a rocket carrying cosmonauts from the troubled new spaceport has been postponed by at least two years to after 2020, as a cost saving measure.  RFE/RL offers another cautionary tale from those hoping to benefit from Putin’s ‘Direct Line’.  New statistics show that Putin’s positivity on the economy may be somewhat misplaced, as the economy witnessed a sharp contraction in the first quarter.  Financial turmoil has seen 44% of Russians reduce their basic goods budget by an average of 24% since December.  Consumer confidence, Forbes reports, is also in rapid descent.

Russia has denied a report that it is on the verge of signing a gas pipeline deal with Greece which would bring the cash-strapped state €5 billion.  Israel has protested against Russia’s decision to push ahead with its plans to sell an S-300 air-defence system to Iran.  With the West softening on Iran, Moscow’s speedy decision to go ahead with the sale is its way of telling Tehran: ‘we are the most reliable partner and the only great power you can rely on’, argues an analyst in the Washington Post.