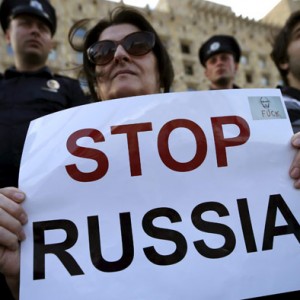 Russia has rejected changes to Ukraine’s constitution proposed by President Petro Poroshenko on the basis that they are not significant enough to fulfill Ukraine’s obligations under the Minsk peace accord, having been brought forth without consultation with rebel leaders in Luhansk and Donetsk.  Foreign Minister Sergei Lavrov has had phone conversations with Ukrainian Foreign Minister Pavlo Klimkin, Germany’s Frank-Walter Steinmeier, and U.S. Secretary of State John Kerry in which he has assured them that Russian troops have withdrawn from the Mariupol area.  It would seem Washington remains unconvinced about Moscow’s commitment to peace, with reports emerging of a new set of sanctions being prepared.  Former Georgian President and arch Kremlin foe Mikhail Saakashvili, now serving as governor of Odessa, will welcome political activist Maria Gaidar to his team as the new deputy governor.  In the Georgian capital of Tbilisi, hundreds of citizens have protested against an alleged Russian land grab.

President Putin has ordered the establishment of new reserve force to enhance Russia’s military readiness and training, to be funded by the existing Defense Ministry budget.  ‘In the process, he is all but admitting that the existing reserve structure is moribund,’ says Mark Galeotti, who notes that the problems in the system as it stands are largely economic.  The same applies for the problems besetting the Kremlin’s military modernisation drive, which has been slowed by the restriction of imported parts due to sanctions.  Despite financial trials and tribulations, this year Russia has beaten expectations and offered investors returns that have surpassed those of the other BRICS.  One problem that looms on the horizon is that of regional debt, which has risen as a result of decrees to raise social spending in 2012.  ‘A default by a large region could block market access for the Finance Ministry itself’, one analyst warns.

The foreign agent law, the dwindling number of willing benefactors and the devalued ruble: three elements currently assailing Russia’s charity sector, according to this article.  Newsweek looks at Putin’s enemies in the sphere of culture, among them artist Petr Pavlensky, Pussy Riot and the formidably-named Cannibal Corpse.