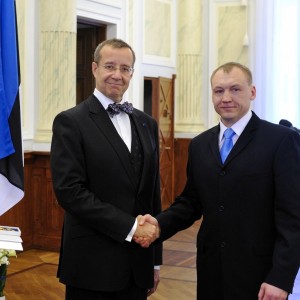 Estonian Prime Minister Taavi Roivas has issued a statement strongly condemning the jailing of Eston Kohver, the Estonian security officer who was believed to have been abducted by the FSB, saying, ‘his illegal detention constitutes a grave violation of international law by the Russian Federation’.  The EU foreign affairs chief agrees that ‘Mr. Kohver has been deprived of the right to a fair trial’.  ‘It’s the summer of political trials in Russia’, the Washington Post notes, as Ukrainian film director Oleg Sentsov faces a military court for alleged acts of terrorism, which he denies.  Alongside him, Ukrainian pilot Nadiya Savchenko will appear in court this week on what are widely seen as fabricated charges of murder.  These people are, in the words of RFE/RL’s Brian Whitmore, ‘Vladimir Putin’s hostages, two men and a woman who have become victims of the Kremlin leader’s jihad against international rules, norms, and law’.  ‘Of course these people are all material to be traded, but how many years will they spend in prison first?’ wonders one human rights lawyer.

As violence escalates in Ukraine’s east, NATO has warned Russia that rebel attempts to claim more of Ukrainian territory would be considered ‘unacceptable to the international community‘.  The Kremlin has an issue with NATO’s war games, which it sees as a gesture of support for Kiev’s anti-Russian government.  Addressing a security panel in Crimea, President Putin has warned officials to be wary of foreign-funded sabotage and radical propaganda.  More than 50% of Russians doubt that President Putin has a complete picture of what is going on in Russia or believe that he is being deliberately misled by his entourage.  See here for an analysis of possible motives for the demotion of Putin crony Vladimir Yakunin.

French supermarket chain Auchan is undergoing inspections at the moment, which, though described as ‘systematic’, seem to be flavoured with bitterness over the thwarted Mistral deal.  The economic downturn has dealt the banking sector a blow, but four private banks with a friendly relationship with the Kremlin seem to be emerging as the beneficiaries of the crisis, at the vanguard of a ‘new banking sector’.  Much to the despair of its director, government cuts mean that the State Hermitage Museum in St. Petersburg will no longer have police guards.