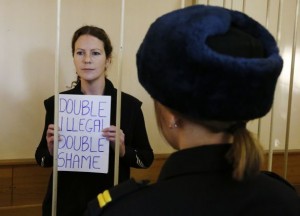 Russian courts have now granted bail to six more Greenpeace activists incarcerated following a protest over Arctic drilling, meaning nine are now on bail, though the organisation’s head remains concerned about ‘what conditions our friends will endure when they are released from jail’.  An ambulance has been called to a Moscow court where the opposition Bolotnaya Square rally activists are on trial.  The Russian government will be called to question on the case by the ECHR by January of next year over various rights abuses, a lawyer for the protesters has announced.  Foreign Minister Sergei Lavrov has lambasted the EU for placing ‘unforgivable pressure‘ on Ukraine to enter into a trade pact.  A court has ruled that Lady Gaga fell foul of the gay propaganda law when she performed in St Petersburg last year.  Amnesty International has released a statement arguing that the work of more than 1,000 NGOs is being endangered by the ‘foreign agents’ law.  In an unusually public act of dissent, lawyers from over 80 law firms have published an open letter criticising a new Kremlin measure which would undermine the ‘most progressive branch of Russia’s judiciary’.

Billionaire Mikhail Prokhorov has joined a chorus of protest over an Investigative Committee endeavour to change rules on tax investigations which would allow them to proceed without the approval of the Federal Tax Service.  Master Bank, the 41st largest bank in Russia, on whose board President Putin’s cousin serves, has had its license revoked for a number of ‘dubious transfers‘.  Mixed news on Russia’s economy has emerged from the OECD; whilst the growth forecast for 2013 has been slashed again, it is expected to pick up in 2015.  Businessweek reports on a new working paper entitled Russia’s Fiscal Gap, which points to some ‘worrisome trends for Putin’s current government’.

Alexander Lebedev has become head of the investigative team at his paper, the Novaya Gazeta, ‘a convenient platform for his campaign against “dirty money.”’  Through works like ‘Putin’s Games’ and ‘Pussy Versus Putin’ documentary film makers are taking on the regime at the International Documentary Film Festival in Amsterdam.