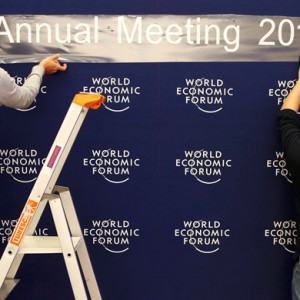 Although the economy is lacklustre and President Putin is absent, VTB’s opening night soiree at the World Economic Forum in Davos indicates that Russian participants have a positive approach to the summit, which begins today.  In what has been described as an ‘unusually loud investment‘ by a U.S. company in a Russian oil company, oil services giant Schlumberger intends to purchase a 45.65% stake in Eurasia Drilling for around $1.7 billion, apparently hoping that when sanctions are eventually lifted it will reap the benefits of the sector.  The Central Bank’s first deputy governor Ksenia Yudayeva believes that capital controls are not yet necessary to tackle the state’s financial problems, as Russia is not suffering the same pace of capital outflows as at the end of 2008.  Bloomberg considers the return of Dmitry Tulin, a Soviet-era central banker to the institution, as the Kremlin seek to redress economic woes.  Switzerland’s decision to scrap the franc cap last week may cost Russia’s biggest state-run companies as much as half a billion dollars.  There are reports that Russia may resume imports of some banned food products from the European Union.  A new study has found that 54% of Russians cannot afford to buy anything beyond basic goods.

In ‘one of the boldest assertions yet‘ by Kiev of direct Russian military involvement in the conflict in the country’s East, a military spokesman has reported regular Russian troops attacking Ukrainian military units.  Following Defense Minister Sergei Shoigu’s visit to the Islamic Republic, Moscow and Tehran have signed a military cooperation agreement, amid reports that Russia might deliver a long-overdue S-300 air defence missile system to the state.

Rights group The Committee Against Torture intends to contest the ‘foreign agent’ designation imposed on it by the government last week.  Amnesty International has criticized a bill that would outlaw ‘undesirable foreign organisations’ as ‘another troubling sign of the authorities’ vigorous measures to restrict any public space for criticism.’  A group of suspects detained for a highly public pro-Ukraine protest on Moscow’s skyline are facing at least another two months of house arrest.  Two activists hoping to exorcise the spirit of re-Sovietization by dousing Lenin’s Mausoleum in holy water have received 10-day jail sentences.

PHOTO: Workers set up logos of the World Economic Forum (WEF) at the congress center in the Swiss mountain resort of Davos Jan. 20. (Ruben Sprich / Reuters)