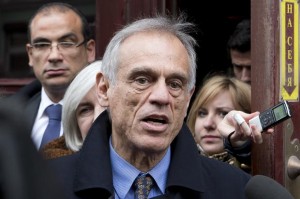 Talks in Moscow between Cypriot finance minister, Michael Sarris, and Russian finance officials have proved inconclusive, but the former has pledged he will remain in Moscow for ‘as long as it takes’ to reach a deal.  A funds-for-assets exchange is apparently being considered, with access to Cypriot banks and gas (or even a naval port) as possible incentives for Moscow. Dmitry Medvedev has joined Putin in criticizing the EU’s approach to the situation; he has also said that the crisis may force Moscow to review the share of euros it retains in its international currency reserves.  The Cypriot crisis could however promote a return of capital to Moscow, says Bloomberg.  With consumption and investment growth failing to meet expectations last month, concerns are mounting about the state of Russia’s economy.  The General Manager of the Bolshoi ballet has rebuffed claims by former ballerina Anastasia Volochkova that dancers were routinely pimped out to patrons. Star wars at the ballet are ongoing.

Apparently the majority of Russian ministers disagree with the recent ban on U.S. nationals adopting Russian children.  Could a United Russia deputy’s unauthorized meeting with Magnitsky list architect Senator Ben Cardin land him in hot water?   Former A Just Russia member Dmitry Gudkov has been advised to step down after he criticized Putin’s ‘repressive methods’ on a trip to the U.S. earlier this month.  A Just Russia Deputy Ilya Ponomaryov’s income declarations may be subject to a new probe at the behest of Liberal Democratic Party chief Vladimir Zhirinovsky.  The criminal case against opposition lawyer Alexei Navalny, for which he could receive up to ten years in jail, has been sent to a Kirov region court.  Moscow’s highest court panel has upheld guilty verdicts for two members of the Pussy Riot group.  ITAR-TASS reports on ‘dissertation diggers’, a group of bloggers and activists who seek to expose false qualifications among the political elite.