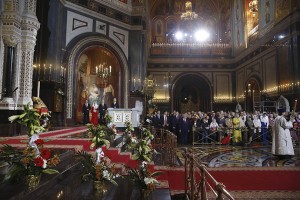 Three people have been killed and three others injured in an overnight shootout in the eastern Ukrainian city of Slaviansk after a group of gunmen launched an attack on a checkpoint.  Russia’s Foreign Ministry has spoken of its ‘outrage‘ at the attack, which has undermined last week’s Geneva agreement, as a violation of an Easter truce called by Ukrainian authorities.  Pro-Russian authorities in the region have laid the blame squarely on Ukrainian far-right nationalists; Ukraine’s police have accused Russia of staging the incident.  Following an entry ban on Russian males, Ukrainian border guards have denied entry to around 600 citizens in the first 24 hours of the ban.  Analysts here discuss the idea that the entry ban might be contributing to ghettoisation.  According to this report, despite the Ukraine crisis affecting bond markets, Russian companies are still well-placed to service their debts.  President Putin has approved legal amendments to make it simpler for Russian speakers in the former Soviet Union to acquire Russian citizenship.  Presidential spokesman Dmitry Peskov has confirmed that Russia does have troops near the Ukrainian border, some on a ‘permanent basis’.

Russia has announced it will build more than 150 military facilities on the Iturup and Kunashir islands, part of the disputed Kuril island chains, before 2016.  Despite the sanctions over Ukraine, Royal Dutch Shell maintains it is committed to expansion in Russia, a pledge which has been wholeheartedly welcomed by Vladimir Putin.  Gazprom has shipped the first oil from Russia’s only offshore Arctic field in operation, scaled by Greenpeace activists last year, to Europe.  As trade with the West suffers, Deputy Prime Minister Dmitry Rogozin has asserted that bilateral trade with China can increase to $100 billion by next year and thanked Chinese Vice Premier Wang Yang for Beijing’s continued support.   Russia’s parliament has agreed to cancel almost $10 billion of North Korea’s Soviet-era debt, in a deal expected to sweeten the building of a gas pipeline to South Korea that would cross the state.

The speaker of Russia’s State Duma has apologised for the behaviour of ultranationalist lawmaker Vladimir Zhirinovsky, who recently exhorted his entourage to rape a pregnant journalist who asked him about Ukraine sanctions.  The Power Vertical podcast examines Putin’s 12th Q+A.  President Vladimir Putin’s popularity is at its peak, his spokesman says, thanks to the rallying nationalist power of the Ukraine crisis, but the President too, can get lonely.