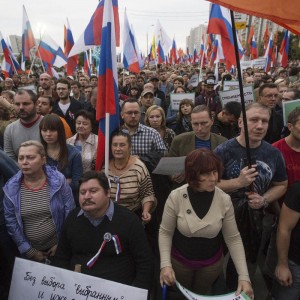 U.S. officials report that Russia has sent fighter jets to Syria, prompting Washington to speak of the need for coordination between its military efforts and those of Moscow in the fight against IS.  Stratfor offers photographic evidence of the rapid escalation of Russia’s military deployment to the Bassel al Assad air base in Latakia.  Concerned about the possibility of accidental fire between troops, Israeli Prime Minister Benjamin Netanyahu is in Moscow today to seek reassurances from President Putin about activities in Syria.  The Russian contract soldiers who told the press they were being deployed to the conflict zone, whilst the Kremlin denied it was sending combat troops, may face criminal charges.  In what the Financial Times has described as the ‘latest example of Moscow’s determination to assert its influence beyond Russia’s borders’, President Putin has voiced support for the creation of an air base in Belarus.  Venezuela hopes to purchase a minimum of 12 new Su fighters for its armed forces from Russia.

‘It’s not like your wife that you’re married to your whole life’: the words of one Putin critic expressing weariness with the leader’s ongoing presidency at a march in Moscow on Sunday which attracted 8,000 people according to the march’s organisers, 4,000 according to the authorities.  Vyacheslav Gaizer, the governor of Komi republic, has become the second regional head in six months to be arrested for corruption, in a major fraud case involving the illegal acquisition of state assets.  In an interview with RFE/RL, Yasen Zasursky, who led the Moscow State University journalism department for more than 40 years, expresses his disappointment with the Putin press.  The President may try to deny it, but controls on the Internet, increased religious conservatism and international isolation are all exacerbating Russia’s brain drain, says Bloomberg.  The Kremlin has raised eyebrows by funding and hosting a conference for separatist groups from across the globe.

The Finance Ministry is hoping to boost revenues by $24.1 billion between 2016 and 2018 thanks to a new calculation method for mineral extraction tax for oil companies.  After lengthy debate, Russia will impose a ban on GM foods.