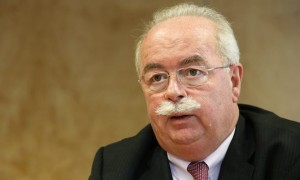 The chief executive of French oil giant Total, Christophe de Margerie, along with three French crew members, has died in a collision between his corporate jet and a snow plough at Moscow’s Vnukovo Airport.  It has been confirmed by the authorities that the driver of the snow removal machine was drunk.  Polish parliamentary speaker Radoslaw Sikorski has told U.S. magazine ‘Politico’  that in 2008 President Putin proposed to Poland’s then-prime minister Donald Tusk that Ukraine be divided between the two countries.  Sikorski has subsequently said of his interview, ‘some of my words were misinterpreted‘.  Poland may deport a number of Russian diplomats from the country in an espionage scandal.  Foreign Minister Sergei Lavrov has described relations between Moscow and Washington as being at ‘rock bottom‘ and that they would only improve when ‘unilateral sanctions‘ were abandoned.  Lavrov has criticised what he calls Washington’s ‘double standards in order to implement geopolitical designs,’ regarding Islamic State in particular.  Attempts to reach a breakthrough on the Ukraine conflict through talks in Italy have proved fruitless.

Seventy-three-year-old human rights activist Lyudmila Bogatenkova, chairwoman of the Budyonnovsk branch of the Soldiers’ Mothers Committee NGO, has been released from detention after two nights in jail in southern Russia.  The organisation says that the charges of fraud against Bogatenkova are ‘an act of intimidation connected to her activities‘.  Activist Dmitry Ishevsky, convicted for participating in the Bolotnaya protests of 2012 has appealed against his prison sentence of three years and two months.  A group of Russian human rights activists are planning a series of one-person pickets to protest against the trial of Ukrainian pilot Nadezhda Savchenko, who was captured in eastern Ukraine and was brought to Russia to face charges of participating in the killing of two Russian journalists.  Activist Yelena Panfilova has been elected deputy chair of the global anti-corruption watchdog Transparency International.

The Swedish military’s apparent search for a damaged Russian submarine has spooked neighbouring Baltic countries. The Wall Street Journal suggests that the battering Russia’s financial market has taken in recent weeks may have opened doors to risk-taking bargain hunters.

PHOTO: Christophe de Margerie, CEO of the French oil and gas company Total SA, speaks during an interview in Paris in this July 7, 2014.  (Benoit Tessier / Reuters)