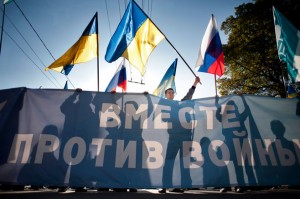 In Moscow, opposition leaders Boris Nemtsov and Yevgenia Chirikova were among the thousands of protestors who gathered on Sunday to march against what they perceive as Russia’s collusion in fuelling the Ukraine conflict.  Estimates for turnout figures vary wildly, from the police estimate of 5,000 people to independent monitoring group SONAR’s count of 26,000.  Similar events were held across the country, with more than 1,000 people gathering in St. Petersburg for an unsanctioned rally.  Anti-gay activists from an Orthodox church-affiliated group have attacked participants in a gay rights festival in the same city.  Yukos founder Mikhail Khodorkovsky has indicated that he may return to politics with the reopening of his foundation, Open Russia, which aims to coordinate the political and civic opposition.  Billionaire Vladimir Yevtushenkov, whose arrest last week drew comparisons with Khodorkovsky, has reportedly been freed from house arrest.  Bloomberg considers how the cases differ.  Russia’s Security Council plans to introduce stricter controls over access to the global Internet ‘during times of crisis’.  The authorities refute the accusation this is to deny Russians opportunities to surf global media, but to deal with instances when the West tries to block Russia’s access.

NATO’s top European general, Philip Breedlove, has asserted that the truce in Ukraine is a ‘cease-fire in name only‘.  A third Russian aid convoy has been despatched to the Ukrainian city of Donetsk, unapproved by the International Committee of the Red Cross.  Survivors of German victims of Malaysian Airlines flight MH17 plan to sue Ukraine and its president for manslaughter by negligence in 298 cases, on the basis that it failed to close its airspace.  U.S. Secretary of State John Kerry and Foreign Minister Sergei Lavrov have underscored the necessity of cooperating in the fight against the Islamic State.  The head of Moscow’s Public Institute of Suffrage believes that Scotland’s referendum on independence may have been rigged.

In an interview with the Russia-24 channel, Prime Minister Medvedev has asserted that he backs trade with Europe, ‘if European partners do not make some absurd decisions to oust us from this market‘.  Sanctions will apparently imperil around 20% of Russia’s total oil output.  The Moscow Times reports on Exxon Mobil’s exit from the Arctic.  U.S. private equity group Blackstone Group is ‘giving up on Russia‘.  Sberbank is undertaken a mammoth operation to find internal sources of funding now that ‘practically all external markets are now closed‘.  Russia’s auto market is also in trouble.  Russia has, for the first time, made it onto Bloomberg’s list of countries with the most efficient health care, trailing Iran and Azerbaijan.

PHOTO: Activists for peace in Ukraine take to the streets in Moscow, September 21, 2014.  (Pascal Dumont / MT)