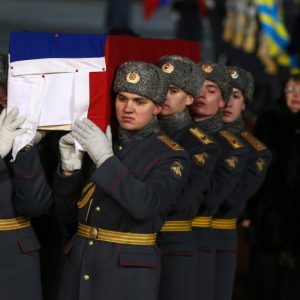 As the death toll from consumption of a batch of fake bath tincture in Siberia mounts to 71, President Putin has ordered the government to impose new regulations to control the production and sale of ‘so-called surrogate alcohol’.  The President is also considering reducing taxes on alcohol in an attempt to quell demand for substitutes, such as perfume, aftershave and bath tinctures.  Cigarette prices are set to double in 2017 though there are concerns that the move will promote illegal tobacco use.  There is now, according to a new report, ‘strong proof’ that there are links between the group that hacked the Democratic National Committee and Russia’s military intelligence agency, the GRU.  U.S. sources believe that Russia has recently tested what they think is a weapon capable of destroying a satellite.   According to the Kremlin, following yesterday’s announcement of further sanctions, almost all communications channels between Moscow and Washington have been frozen.  The Kremlin will formally request that the United States extradite convicted arms dealer Viktor Bout back to Russia.

‘It looks like the Dutch authorities have started to get a taste for deliberately destroying relations with Russia’, says the Foreign Ministry, after the Netherlands gave permission for the United States to begin stocking tanks there, and a Dutch court ruled that Crimean treasures in one of its museums be returned to Ukraine rather than Russia.  Families in Russia reportedly allot 70-80% of their household income to essentials such as food, medicine, housing, and transport.  Sberbank, the largest lender in Russia, intends to close up to half of its branches over the next five years.

The director of the Russian Academy of Sciences’ Special Astrophysical Observatory is concerned that climate change is preventing astronomers from observing the night sky.  The remote port of Murmansk however is hoping that the warming of the Arctic will usher in its renaissance as an international hub on the northern sea route.  The Moscow Times reports on how a 21-year-old music teacher might have lost her job,  courtesy of a lip-piercing and the efforts of professional troller Timur Bulatov, who scours the internet for evidence of homosexual and non-traditional inclinations among teachers.

PHOTO: The body of Moscow’s ambassador to Turkey, Andrei Karlov, arrives in Russia following his assassination in Ankara. (RFE/RL)