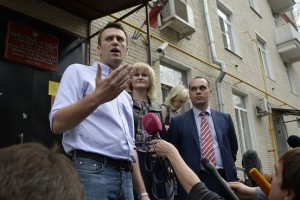 Moscow’s Babushkinsky District Court has found opposition leader Alexei Navalny guilty of slander against City Duma Deputy Alexei Lisovenko.  The campaigner could face a stint in jail over the charges.  Moscow municipal deputy Alexei Gusev, a supporter of Alexei Navalny, is being investigated for extremism as a result of a spoof interview with himself which he claims the authorities posted.  The State Duma has approved harsh new limitations on social-networking sites and bloggers on the pretext of fighting terrorism.  The founder and former CEO of leading Russian social-networking site VKontakte, Pavel Durov, targeted by the authorities, says he has left Russia since ‘unfortunately, the country is incompatible with Internet business at the moment’.  A Moscow court has sentenced a journalist to 6 1/2 years in prison for extremism over articles examining Chechen separatism.  In Eastern Ukraine, pro-Russian separatists have apparently captured an American reporter, Simon Ostrovsky, who works for Vice Media.  Ultranationalist Kremlin-loyalist Vladimir Zhirinovsky could face criminal charges after being caught on camera urging an aide to rape a pregnant reporter.

Ukraine’s acting President Oleksandr Turchynov has called for the relaunch of an ‘antiterrorist’ operation against pro-Russian rebels in eastern Ukraine, after two politicians were found dead, bearing signs of torture, near the rebel-held city of Slovyansk.  With the Ukrainian Army in ‘complete disarray‘, the prospect of invasion must be alluring to the hawkish Putin, Alexander Golts suggests, whilst this commentator argues that a new kind of warfare is at work in Ukraine.  The U.S. reportedly plans to deploy about 600 troops for training exercises in Poland, Latvia, Lithuania and Estonia to reassure NATO and regional allies adjacent to Russia.  A senior Russian lawmaker has suggested that Washington is behind the order to capture pro-Russian activists by Ukrainian authorities.

Prime Minister Medvedev has told lawmakers that Russia may employ a prepayment system for gas supplies if Ukraine fails to make good on its energy bills.  President Putin has called for upgrading Russia’s military infrastructure in the hotly-contested Arctic.  Access to resources in the Caspian Sea, where Russia has just launched military exercises, continues to be a point of contention for littoral states.  Evidence that sanctions may be affecting Russian commerce has come through reports that Fiat and Renault may back out of a car assembly deal with the ZIL plant as a falling ruble makes the project unworkable.  Today is Lenin’s birthday and a public-opinion poll to mark the occasion has found that 51% of respondents view the influence of Bolshevik leader as positive.