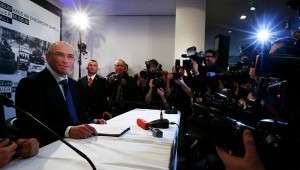 TODAY: Khordokovsky reunited with family in Berlin; talks to press; states he will not sponsor opposition but rather fight for rights of political prisoners. Pussy Riot member walks free; describes her own release as cynical move; environmental activist receives jail sentence; Arctic oil.

Mikhail Khordokovsky has spent his first weekend of freedom in Berlin, after being hastily bundled onto a private jet ‘in the best tradition of the 1970s‘ in his surprise release from jail.  In his first public appearance since his release he visited Checkpoint Charlie, after which he gave a press conference, of which RFE/RL has footage.  The Yukos founder expressed immense gratitude towards supporters including the German Chancellor Angela Merkel and the former German Foreign Minister Hans-Dietrich Genscher who was apparently instrumental in securing his release.  To the disappointment of some opposition activists, for whom the tycoon has become a figurehead, he was quick to assert that he would not be ‘involved in the struggle for power’ or ‘sponsor‘ the opposition, noting that he does not have the financial ability to do so.  He will however engage in ‘public activity‘ with a particular focus on the freeing of other political prisoners both in Russia and abroad, among them Ukraine’s former prime minister, Yulia Tymoshenko.

The Independent notes that the former oligarch ‘clearly still felt intimidated by the Russian authorities’ and did not venture any personal criticism of President Putin, saying ‘I put the issue of relations (with President Putin) on a pragmatic plane, which does not envisage revenge and hatred’.  He added, ‘I think the Russian problem is not just the president as a person. The problem is that our citizens, by a large majority, don’t understand that their fate […] They are happy to delegate it.’  Agreeing not to lead the political opposition or file lawsuits to recover lost assets will have been two conditions of his release, says Georgy Bovt.  ‘There are several versions about what moved Putin to suddenly show mercy, but no one is seriously considering goodwill as a possible motive’.  The Moscow Times suggests that the opposition’s ‘lackluster performance‘ in recent regional elections might have given Putin the confidence to offer clemency.  Head to RFE/RL’s Power Vertical podcast for an in-depth analysis.  Pussy Riot activist Maria Alyokhina, who has just been released from prison under the terms of a new amnesty, has described her release as ‘a public relations stunt‘.

Human Rights Watch has warned that the amnesties should not detract from the very real issue of wrongful imprisonment in Russia.  On which note, environmental activist Yevgeny Vitishko, noted for his criticism of constructions for the Sochi Winter Olympics, has been sentenced to three years in prison.  Gazprom has initiated oil production at its Greenpeace-irking Arctic offshore Prirazlomnoye field.  In a rare piece of good news for the environment, the Supreme Court has overturned a decision by the Moscow region government to allow construction on environmentally protected land of the Arkhangelskoye estate.  Tycoon Mikhail Prokhorov, who has just acquired a 47% stake in troublemaker potash firm Uralkali says he is stepping down as head of his Civic Platform political party, in place of his sister.

PHOTO: Mikhail Khodorkovsky smiles on a visit to the Checkpoint Charlie museum in Berlin on Sunday, December 22, 2013 less than 36 hours after being freed.  (Steffi Loos/Reuters)