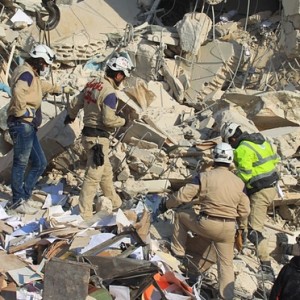 A new report issued by Amnesty International has determined that Russia’s bombing of Syria may constitute a war crime.  Citing a surge in the use of cluster munitions, the report has found that attacks have claimed the lives of 200 civilians and shown ‘evidence of violations of international humanitarian law’.   Turkish Prime Minister Ahmet Davutoglu has condemned an alleged attack by Russian fighters on the rebel-held Syrian city of Idlib as a manifestation of ‘Russian imperialist goals’.  The FSB has warned that, this holiday period, Russia faces the highest terror threat levels seen yet during Putin’s rule.  As a result of a new bill passed in the State Duma, officers from the security services will be allowed to use firearms against crowds in order to thwart acts of terror.  In perhaps the first ever deal of its kind, a Russian private commercial satellite company, Dauria Aerospace, has completed a contract to sell two of its satellites to a U.S. firm.  Next week, Russia will start construction on two nuclear power plant units in Iran.

Despite the freezing of a free trade zone with Ukraine, President Putin has asserted that Russia will continue to endeavour to ‘normalize relations (in trade)’ with the E.U. and Ukraine.  Kiev has apparently reached an agreement with Russia-backed separatists for a ceasefire during the Christmas and New Year holidays.  The Moscow Times reports that the capital’s library of Ukrainian literature will be closed down, following a series of raids to investigate alleged extremism.  A 76-year-old opposition activist charged with breaking Russian protest laws has fled to Ukraine in the hope of gaining political asylum.  The Investigative Committee has had Yukos founder and democracy advocate Mikhail Khodorkovsky put on the international wanted list.

U.S. energy major ConocoPhillips has left Russia after more than 25 years in the country, having sold its stake in a joint venture with Rosneft to Trisonnery Asset Limited.  According to the FT, the decision ‘highlights the challenges facing foreign investors in the country’s energy sector’.

PHOTO: A search for survivors at a site hit in December by what activists said were Russian airstrikes in the Syrian city of Idlib. (Ammar Abdullah/Reuters)