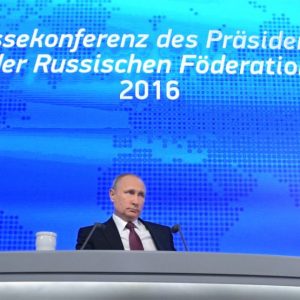 Vladimir Putin’s annual press conference is underway.  Live blogs are offered here and here.  In the presence of roughly 1500 journalists, thus far the President has focused on the economy, which is, he says, ‘developing positively’, citing real wages increasing and capital flight decreasing.  He has noted in particular the strength of the agricultural sector, predicting a post-Soviet record for this year’s harvest and growth in machine building.  Beginning to touch upon the issue of the Trump election, he has apparently stated his satisfaction that many Americans agree with ‘him on how the world works and on traditional values’.  He also believes that Clinton should ‘lose with dignity’.  The President is nonplussed about Trump’s statements about the U.S. expanding its nuclear arsenal.  At an end-of-year meeting at the Defense Ministry, Putin asserted that Russia’s military is strong enough to repel any potential attacker but must be prepared to ‘adjust plans to neutralize potential threats to our country’.

Bloomberg’s Digital Defense webcast examines the possibility that Russia may already be interfering with elections coming up in France, Germany and the Netherlands.  Bloomberg also offers a useful Q&A on allegations of Russian hacking in the U.S. elections.  Journalist and historian Anne Applebaum describes here her firsthand experience of being the victim of a Kremlin misinformation campaign.  Following the poisoned bath tincture deaths in Siberia, Russians will be required to have a prescription to purchase medicines which contain alcohol in an attempt to thwart their use as cheap alternatives to vodka.

Despite its E.U. aspirations, Serbia is looking to deepen military cooperation with Russia, a sentiment reciprocated by Russian Defense Minister Army General Sergey Shoigu.  The ongoing doping scandal has cost Russia hosting rights to two international sporting event – the World Cup biathlon meeting and a speed skating meet both scheduled for March.  The Guardian examines the plight of the Arctic-dwelling Nenets people whose livelihoods are at risk as a result of plans to build an oil terminal on the Tanalau cape.