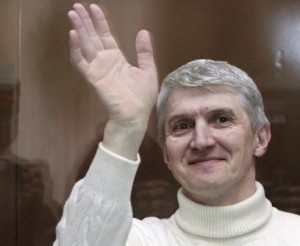 The former business partner of freed Yukos founder Mikhail Khodorkovsky, Platon Lebedev, has been offered early release from prison and is expected to leave jail today.  A decision not to overturn the demand that the pair pay the authorities $521 million in tax arrears has been taken by Khodorkovsky as a signal that he is not welcome in Russia. His lawyers will appeal the decision.  Has Khodorkovsky’s release had any real effect on the investment climate in Russia?  Largely thanks to its entry into the WTO, Russia has for the first time entered the top 50 in Bloomberg’s Best Countries for Business 2014, at 43rd position.  Auto giant AvtoVAZ will lay off 2,500 employees this year.

Singer Elton John, who was touted by Vladimir Putin last week as an example of how welcome gay men are in Russia, has written a letter to the President in which he argues that it ‘is a very different story for those living inside the country’.  As the Olympic Games loom, the European Parliament has expressed grave concern over the state of gay rights in Russia.  Moscow meanwhile has accused the E.U. of trying to propagate ‘an alien view‘ of homosexuality in other countries.  In its ‘Freedom In The World 2014’ report, rights watchdog Freedom House has found Russia to be one of the countries suffering ‘serious setbacks‘ in political rights and civil liberties during 2013.  The Kremlin, and Prime Minister Medvedev in particular, is doing its utmost to downplay concerns over the possibility of a terrorist attack disrupting the Sochi Olympics.  RFE/RL reports on the exploitation of Serbian immigrant workers involved in constructing the facilities.  Deputy Prime Minister Arkady Dvorkovich has high hopes for economic gains from the $7 billion games.  The ruble is apparently set to rebound as the Olympics increase the current-account surplus.

Last Soviet leader Mikhail Gorbachev has called for the leaders of the United States and Russia to weigh in on the deadlock between demonstrators and police in Kiev. The Kremlin explains here how it will fund the $15 billion bailout it has promised to troubled Ukraine, which owes Russia $2.7 billion for supplies of natural gas last year.

PHOTO: A photo from 2009 shows Russian businessman Platon Lebedev waving to relatives before a trial session in Moscow. A court ordered him released from prison on January 23, 2014. (Maxim Shipenkov/European Pressphoto Agency)