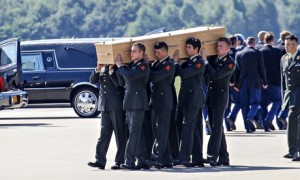 TODAY: Rebels admit owning Buk missile system; still lay the blame on Ukraine; two fighter jets shot down in eastern Ukraine; Russia asserts sanction impact negligeable; EU mulls measures against Russia, rifts likely to thwart sanctions drive. Concerns over climate for media workers in Ukraine; NGO foreign agent law claims new victims.  In an interview with Reuters, Ukrainian rebel leader Alexander Khodakovsky has acknowledged that separatists have in their possession the Buk anti-aircraft system suspected to have shot down MH17, but blamed Kiev for the incident on the basis that it knew that the missile was in separatist-held territory and ‘did nothing to protect security, but provoked the use of this type of weapon against a plane that was flying with peaceful civilians.’  Two Ukrainian Sukhoi fighter jets have reportedly been shot down in eastern Ukraine by pro-Russia rebels, just 16 miles from the MH17 crash site.  The White House sees this latest move as evidence of a systematic campaign by separatists using Russian weapons against aircraft.  Ukraine’s Security Council believes the military jets were hit by missiles launched from Russia itself.  The volume of weapons Russia is channelling to Ukraine’s East suggests it is ‘trying to create a proper military force‘, says an analyst in the FT.  A group of U.S. senators have proposed designating the self-declared Donetsk People’s Republic a ‘foreign terrorist organization‘.  Alexander Borodai, the head of the aforementioned Republic has said that bodies of victims of the MH17 disaster were not kept in refrigerated conditions because the OSCE representatives failed to arrive at the crash site promptly.  The blackboxes from the flight have reached the International Civil Aviation Organization in good condition.     Russia expects growth will remain at around 1% this year, the Russian president’s economic aide, Andrei Belousov, has said, arguing that sanctions ‘don’t have a macroeconomic effect‘, whilst Trade Minister Denis Manturov dismissed them as ‘peanuts‘.  Several senior German lawmakers have raised the possibility of depriving Russia of its right to host the 2018 World Cup after the downing of MH17.  A number of EU members have suggested an arms embargo.  EU Energy Commissioner Guenther Oettinger has suggested the union refuse Russia technical help to develop Arctic oil and gas fields if Moscow fails to help to deescalate the Ukraine crisis.  The Telegraph explains why it will be so hard for the EU to reach a consensus on punitive measures. Reporters Without Borders has a litany of concerns about journalists working in Ukraine who face harassment from both sides.  A British journalist freelancing for Russia’s RT channel is likely to have been taken captive by Ukrainian military. Russia’s Justice Ministry has included five more Russian nongovernmental organizations on the so-called black list of NGOs acting as ‘foreign agents’ in what Memorial says is a clear attempt to thwart their activity. Perhaps unsurprising, given his ever-mounting list of enemies, but word has it that President Putin employs a full time professional food taster. PHOTO: A coffin of a person who died on Malaysia Airlines flight MH17 is moved at Eindhoven airbase, Holland. (Guardian).