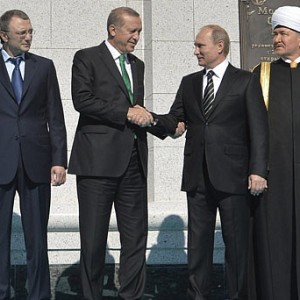 Having seen Moscow use its veto power four times to block resolutions on Syria, the U.S. has warned that blanket employment of the veto could imperil the security council’s legitimacy.  Comments made by Foreign Minister Sergei Lavrov indicating that Washington is increasingly understanding of Moscow’s position on the conflict have been robustly denied by the White House.  If the U.S. is unwilling to join forces with Russia in Syria, President Putin says Russia will not hesitate to launch unilateral airstrikes against Islamic State from inside Syria.  Naval drills in the eastern Mediterranean (potentially near the Syrian coast) could involve a guided missile cruiser, according the Defence Ministry.  The Kremlin has lambasted Washington’s plans to modernize 20 nuclear weapons stationed at a German airbase as a potential ‘violation of the strategic balance in Europe‘ that would precipitate Russian ‘countermeasures’, such as stationing ballistic missiles in Kaliningrad.  At the opening of Moscow’s new grand mosque President Putin called upon Islamic leaders to fight against extremism.

The leader of God’s Will, the extreme radical Russian Orthodox group which vandalised the Sculptures We Do Not See art exhibition at the Manezh this summer, has been sentenced to ten days in jail for petty hooliganism.  Having taken on the regional governor on the matter of corruption and been assaulted by thugs, he still shows no signs of relenting: RFE/RL interviews fearless Kremlin critic, Yabloko deputy Lev Shlosberg.  As the world’s fourth largest emitter of greenhouse gases, Russia has been deemed to have an ‘inadequate’ commitment to the environment; in keeping, it has rejected calls for a more ambitious plan to cut its carbon dioxide emissions.

In August, unemployment surged by 13.5% year-on-year.  As Sberbank closes branches in the face of inefficiency, the government has announced the creation of a new bank, a joint venture with the Post Office, which will have twice as many branches as Russia’s biggest lender.  Public documents apparently show that Russia has plans to create a second major military base, big enough to host 5,000 soldiers and heavy weaponry, near the Ukrainian border.