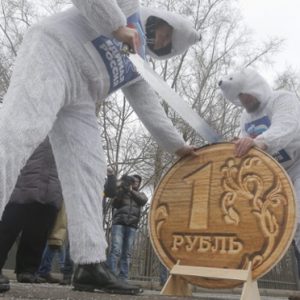 29,000 people have now used a new Facebook page announcing a rally in support of embattled opposition activist Alexei Navalny, to pledge they will attend, with 4,500 more saying ‘maybe.’ Journalist Oleg Kashin who was the victim of a vicious attack in 2010 which left him in a coma, has filed a complaint against Russian investigators with the European Court of Human Rights for ‘inaction‘ during their investigation.  The shareholders of liberal-oriented radio station Ekho Moskvy have elected a new CEO: Mikhail Demin, the former PR director of the Olympic Organizing Committee for the 2014 Winter Games in Sochi, despite efforts of minority shareholders to elect former chief executive Yury Fedutinov, who was fired earlier this year.  The Russian government has instituted a new set of new media restrictions on works ‘promoting a cult of violence and brutality‘, a move criticised by the head of the Kremlin’s rights council, Mikhail Fedotov.  62% of Russians believe governmental order is more important than ensuring the protection of human rights.  HRW reports on how the ‘foreign agent’ law has affected NGOs in Russia.

The rouble has reached its highest levels in two weeks, after the government introduced informal capital controls, which saw foreign currency revenues sold by exporters.  It did however weaken slightly after Standard and Poor’s rating agency warned it could downgrade Russia’s rating to speculative in January; there is at least a 5o% chance that Russia will be lowered to junk status within 90 days, S&P has said.  The central bank says it will assist large Russian companies refinance foreign loans by starting lending money in hard currencies to those who are willing to put their foreign loans as collateral with the regulator.  Analyst Anders Aslund believes that Russia pulling out of Ukraine, thus ending Western sanctions, is the only way the country can reestablish financial solvency.

The Foreign Ministry has condemned Ukraine’s renunciation of its ‘non-aligned’ status as an ‘unfriendly step’ towards Russia.  Ukrainian state energy firm Naftogaz says it has transferred $1.65 billion to Russia’s Gazprom as part of its repayment plan.  The board of Russia’s top natural gas producer has approved investments of $15.41 billion, a lesser sum than originally planned.

PHOTO: Communist party activists saw through a replica of the Russian rouble at an anti-government protest in Moscow on Monday, December 21, 2014. (MAXIM SHIPENKOV/EPA)