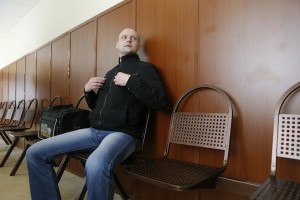 Left Front leader Sergei Udaltsov and activist Leonid Razvozzhayev have been found guilty of organising mass riots at the anti-Putin Bolotnaya Square protests in a trial human rights groups have labelled a ‘mockery of justice‘.  Udaltsov has now gone on hunger strike in protest against the 4 and a half year prison sentence.  Reuters examines the phenomenon of middle class emigration from Russia, which is reportedly rapidly increasing.  Despite the MH17 disaster dealing a blow to Putin’s international image, his approval ratings have reportedly risen to a six-year high, to 86%, according to a state-run poll.  Pundits like broadcaster Dmitry Kiselyev of Channel One, the subject of this report, are helping to keep the President’s image polished.  The IMF has slashed Russia’s economic growth forecast for 2014-2015 to 0.2% from 1.3% for 2014 and to 1% from 2.3% for 2015.

A ‘system mix up‘ during a Ukrainian air defense unit’s rocket launch exercise could have precipitated the downing of the Malaysia Airlines 777.  Russia’s defence ministry has strenuously denied a Ukraine security council statement that missiles that brought down two of its fighter jets may have been fired from Russia.  The United States, whose  proposal to station a missile defense shield in South Korea has riled Moscow, has announced it has evidence that Russia was planning to deliver ‘heavier and more powerful‘ rocket launchers to pro-Russian rebels in eastern Ukraine.  At the news of the resignation of Ukraine’s Prime Minister Arseniy Yatsenyuk, the Chair of the State Duma, Irina Yarovaya, suggested it revealed ‘a wish to avoid responsibility for the troubles and misfortunes that were brought upon the people of Ukraine’.

A Russian-Italian project to develop an S-1000 small submarine has been suspended indefinitely as a result of the political situation.  Canada has announced sanctions against Russia’s air defense consortium Almaz-Antey, along with a host of banks including Novatek and Gazprombank.