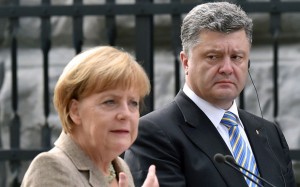 Russia has angrily rebuffed NATO Secretary General Anders Fogh Rasmussen’s scathing remarks about the ‘so-called humanitarian convoy‘ the Kremlin sent to eastern Ukraine, after he suggested it would ‘deepen the crisis in the region, which Russia itself has created and has continued to fuel‘.  Russian diplomats have been excluded from an upcoming NATO summit.  All 227 vehicles of the aid convoy have now returned to Russia; Foreign Minister Sergei Lavrov has said that Moscow plans to send another.   Following talks between Angel Merkel and Ukraine’s President Petro Poroshenko, the German Chancellor has warned that upcoming hotly-anticipated talks between Vladimir Putin and Ukrainian President Petro Poroshenko in Minsk are unlikely to yield a breakthrough.  In a tit-for-tat move over sanctions, Russia has banned several Japanese citizens from entering the country, a gesture Tokyo has called ‘very regrettable‘.  Deputy Prime Minister Arkady Dvorkovich has reassured hungry citizens that there are no plans to close down the Mcdonalds chain in Russia.  The Moscow Times has registered the reactions of disappointed diners to closures.

In an apparent attempt to woo traditional ally Serbia, the Kremlin has lifted a ban on dairy imports from two of its firms.  Russia’s defence ministry has denied reports from Finland that a Russian aircraft entered Finnish airspace without permission on the weekend.

Sufferers of cystic fibrosis have been relieved to discover that the Western-made nutritional supplements indispensable for their health will not be subject to Moscow’s import ban.  Comparisons with the Pussy Riot case are emerging in the scandal around four Muscovites who hoisted the Ukrainian flag on a tower block, whose arrest has earned them many sympathisers on Twitter.