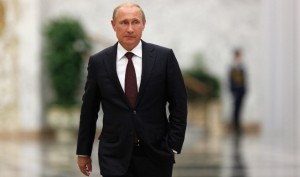 TODAY: Ukraine ceasefire under threat; Obama hits out at Kremlin in UN speech; Crimean Tartars under pressure. Yevtushenkov appeal subject to delay; Bashneft will not sell UPC stake to Sistema; gloomy economic forecasts; FSB surveillance methods under scrutiny in Strasbourg; another plaudit for the President.

Reports have emerged of mortar fire striking an apartment block in the rebel-held city of Donetsk in eastern Ukraine, indicating that the ceasefire may be compromised.  The Investigative Committee has pledged it will undertake an enquiry into reports of a mass grave discovered near the city.  In a speech to the UN general assembly, U.S. President Barack Obama used tough rhetoric against the Kremlin’s ‘vision of the world‘, in which ‘civilised people are not allowed to recover the remains of their loved ones because of the truth that might be revealed‘.  At the same assembly Ukrainian Prime Minister Arseniy Yatsenyuk urged Western countries to uphold sanctions against Russia until all Ukrainian territory has been restored to Kiev’s control.  Ukraine’s President hopes that the state can apply for EU membership in six years.  It has been reported that the Mejlis, the principle representational organisation of Crimea’s minority Tatars, has been ousted from its office.  Crimean Affairs Minister Oleg Savelyev has warned that problems of power and water shortages loom large in the newly absorbed state.  The Kremlin is apparently mulling a $200 million project to bolster the number of Russian speakers in other former Soviet states.

A Russian court has delayed a ruling on an appeal by arrested oil-to-telecoms tycoon Vladimir Yevtushenkov, who is under house arrest on money-laundering charges.  Yevtushenkov’s conglomerate Sistema owns 87% of oil company Bashneft, which has now refused to sell its 98% share in United Petrochemical Company to the conglomerate.  There are conflicting reports as to whether Rosneft will go ahead with its plans to buy Morgan Stanley’s oil trading unit, a deal imperilled by Western sanctions.  The World Bank has predicted that Russia’s economy will grow as little as 0.3% next year; Prime Minister Medvedev has noted that in the period inflation will exceed the 7% target.  Russian lawmakers are considering a ban on long-distance calls via Skype.  The state alcohol watchdog has indicated there may be a new problem with moonshine.

The head of the presidential administration, Sergei Ivanov, has accused the environmental group Greenpeace of extremism.  Journalist Roman Zakharov of Glasnost Defence Foundation has brought a case against the FSB’s secret surveillance operations to the European court of human rights.  Forget Solzhenitsyn or Sakharov: a new poll has found that among those who believe celebrities can be considered moral authorities, President Putin is seen as Russia’s highest.

PHOTO: Russians see President Vladimir Putin as a shining beacon of morality, according to a poll published on September 24, 2014. (Alexander Zemlianichenko / Pool / Reuters)