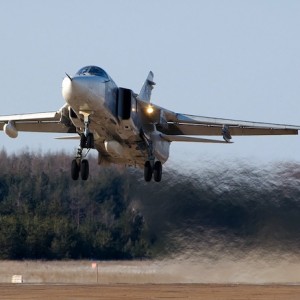 Vladimir Putin has called Turkey ‘accomplices of terrorists‘ who have dealt Russia a ‘stab in the back’ after a Turkish F-16 jet shot down a Russian warplane which it claims violated Turkish airspace.  A similar tone has been used by Prime Minister Medvedev who decried Turkey’s ‘recklessly criminal actions’.  A guided warship, the Moskva, has been deployed to the Mediterranean to provide extra aerial security to Russian forces, Foreign Minister Sergei Lavrov has cancelled a scheduled visit to Turkey today, and military-to-military contacts with Ankara will be suspended.  Lawmakers from both the Federation Council and the State Duma have suggested canceling air communication with Turkey, it has been recommended that tourists do not travel to the popular holiday destination and agricultural watchdog Rosselkhoznadzor has banned poultry supplies by a Turkish company ‘in connection with Listeria’.  President Putin had warned of ‘serious consequences’ but a military response seems unlikely, concludes an article in the Guardian, which collates views from diplomacy analysts.  ‘Turkey would find it very difficult to suddenly stop using Russian natural gas. Russia would find it very difficult to not use the Dardanelles’, concurs this Washington Post piece.  Given that Turkey relies on Russia for around 50% of its natural gas supplies (worth $10 billion to Russia) their energy ties are an ‘unattractive target for retaliation’.

NATO has rejected Russia’s claims that the jet never entered Turkish airspace and asserted that the organisation stands ‘in solidarity with Turkey’.  U.S. President Barack Obama and Turkish President Recep Tayyip Erdogan have agreed on the need to reduce tensions and focus on de-escalation.  Reports today suggests that one of the jet’s two crew members was killed in the incident, whilst the other was rescued and is being taken back to base.  A search and rescue operation involving two Mi-8 helicopters apparently saw another Russian killed as a result of gunfire.

Alexander Kholodov, a St. Petersburg activist and journalist, has been attacked by unknown assailants.  Russia’s increasingly harsh stance on NGOS is expected to be scrutinised at a United Nations General Assembly debate on a resolution recognizing the role of human rights advocates and how to protect them.  Gazprom has officially stopped gas supplies to Ukraine, awaiting payment.