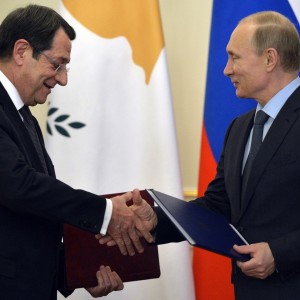 Warning that Europe’s gas supplies would be threatened if Ukraine fails to pay its bills, President Putin has also said that Kiev’s suspension of gas supplies to separatist parts of eastern Ukraine ‘smells of genocide.‘  Russia’s Energy Minister Alexander Novak says Moscow has not yet decided upon which course of action to take with regards to Ukraine’s outstanding gas debts.  NATO supreme allied commander General Philip Breedlove has described the crisis in Ukraine as ‘getting worse every day.‘  Ukraine in the meantime has asserted that the truce in the country’s east is holding, as has Russian Foreign Minister Sergei Lavrov, who has described Washington’s negative rhetoric as a way of ‘trying to whip up hysteria and draw attention away from the need to implement the Minsk agreements.’  U.S. Secretary of State John Kerry has said that further sanctions against Russia are ‘teed up‘ should events in eastern Ukraine merit them.  British Prime Minister David Cameron has suggested port town Mariupol could be the next conflict hotspot in Ukraine; analysts quoted in The Moscow Times identify Bessarabia as a potential conflict zone.  Military drills in Russia’s West have seen as many as 2,000 Russian soldiers assemble in the Pskov region which borders E.U.members Estonia and Latvia.  In order to respond more rapidly to what has been termed ‘increased Russian aggression,’ Norway will restructure its armed forces.  Under a new military agreement with Cyprus, Russia’s navy will be able to use its ports.  ‘I don’t think this should worry anyone,’ commented President Putin, noting that the deal will facilitate work against piracy and terrorism.

As the recession bites, Russia’s leading food retailers will freeze prices on 20 ‘socially important’ goods for two months.  The Ulyanovsk region is planning to bring in food stamps in May to assist low-income families.  Mid-sized bank FundServisBank has become the latest victim of the banking crisis.  The average cost of a bribe in Moscow rose 37% last year, reaching $5,250, says Moscow Police Chief Anatoly Yakunin.

Officials in Arkhangelsk have banned a previously approved gay-rights rally on the basis that its location was undecided.  In the U.S., a group of graduate students from Columbia University Graduate School of Journalism are undertaking a study to see if Russia Today is really the font of propaganda that many in the West claim it to be.  Whilst the Kremlin has pledged it will continue to fund the International Space Station until 2024, after that it will go it alone with its own national station.