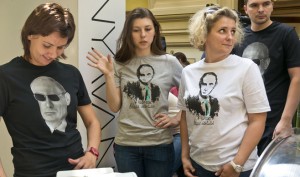 President Putin has held a four-way phone call with his German, French and Ukrainian counterparts to discuss the situation in Ukraine, in which he called for an extension of the terse ceasefire beyond Friday to provide further discussion time.  E.U. Energy Commissioner Guenther Oettinger hopes Moscow will return to negotiating with Kiev over gas prices.  In a video provided by RFE/RL, President Putin can be seen pledging to always protect Russians in Ukraine, though he hopes he can do so without the use of armed forces.  On which note, Russia’s upper house of parliament has voted overwhelmingly to revoke authorization for Russian military intervention in Ukraine, a decision welcomed by Ukraine’s President Petro Poroshenko.  NATO chief Anders Fogh Rasmussen says he has seen ‘no signs‘ that Russia is respecting its international commitments and announced that the alliance will extend its suspension of practical cooperation with the Putin regime.  It has however averted further tensions with Russia, by failing to approve Georgian membership of the group.   Defense Minister Sergei Shoigu has announced that Russian military morale is at its highest in 17 years.

The U.S. apparently has a set of new sanctions ready to impose upon Moscow if it fails to take peace talks with Ukraine seriously.  This article indicates that Washington may however have been convinced by ‘positive signals‘ from Putin.  Major oil producer Lukoil will postpone a eurobond placement until the fall as a result of rising costs of funding resulting from Western sanctions.  Its African ambitions are, it seems, unaffected.  Russia has reportedly lost contact with one of the three military satellites it uses for detecting intercontinental ballistic missile launches.  Regarding yesterday’s reports that Russia will ban large corporations from holding accounts at foreign banks, First Deputy Prime Minister Igor Shuvalov has expressed his personal opposition to the move, and suggested it is broadly unpopular among lawmakers.

Reuters reports that Russia’s GDP rose by 1.1% in the first five months of this year and growth for the whole year may maintain a similar level.  A new poll conducted by the Public Opinion Foundation has found that 66% of Russians would still vote for President Putin after 2018.  The Federation Council has approved a law that imposes prison terms of up to six years for promoting ‘extremism’ on the Internet.  A new survey, the Good Country Index, which ranks countries in terms of their contribution to humanity, has placed a burdensome Russia in 95th place out of 125.  The Guardian examines the nascent phenomenon of ’emigration of disappointment‘ from Russia.

PHOTO: 66% of Russians want Putin to remain president after 2018, according to a new poll. (Vladimir Filonov / MT)