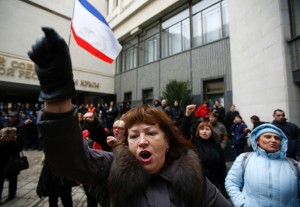 In a rapidly evolving situation, it has been reported that the regional government building and parliament in the Crimea have been seized by ‘armed men in uniforms that do not bear any recognisable insignia‘.  Thousands of ethnic Russians in the majority Russian region of Ukraine have protested against the new government in Kiev and have clashed with Tatars who support the new leadership.  Deposed Ukrainian president Viktor Yanukovych, who has now been placed on the international wanted list, has reportedly been sighted in a luxury health resort run by the Russian department of presidential affairs outside Moscow.  150,000 Russian troops are preparing for war games along the Ukrainian border in a surprise military exercise, which the Kremlin asserts has nothing to do with Ukraine.  A Russian military intervention is unlikely, Luke Harding believes, given that Moscow has one insuperable ‘instrument of control‘: money.  As Ukraine’s economic crisis worsens, banking giant VTB has joined Sberbank in saying it will cease new lending in Ukraine.  Russia will participate in discussions on an IMF financial package to Kiev.  U.S. Secretary of State John F. Kerry has warned against military intervention of any form whilst Washington pledges financial support.

Russian investigators have asked a court to put opposition activist Alexei Navalny, who was arrested earlier this week, under house arrest, on the basis of disobeyed court orders.  The U.S. State Department has urged that the Kremlin rectify the ‘injustice‘ done in sentencing eight demonstrators in the Bolotnaya Square protest.  One detainee escort officer has been accused of physically assaulting Bolotnaya case defendant Alexei Polikhovic following Monday’s sentencing at a Moscow court.  The capital’s annual police report has found that 131 officers were caught drink driving over the past year.

Russian Minister of Economic Development Alexei Ulyukayev has presented what he believes are potential sources of economic growth in 2014-2015: among them consumer demand, opportunities for business people and agriculture.  Russian state nuclear export monopoly Rosatom plans to up its stake in Finnish consortium Fennovoima.  State energy giant Lukoil  is competing with Rosneft in the acquisition of smaller oil and gas interests.  A new poll by VTsIOM finds that President Putin has reached his highest approval rating since he returned to the Kremlin in 2012.

PHOTO: Pro-Russian demonstrators shout slogans during a protest in front of a local government building in Simferopol, Crimea. Fistfights broke out between pro- and anti-Russian demonstrators as Russian President Vladimir Putin ordered military exercises across the border. (Darko Vojinovic/AP)