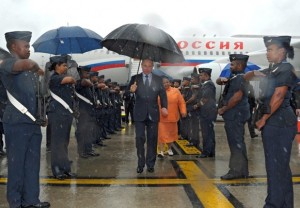 Another branch of the Memorial rights organization in Moscow has been subject to a police raid, with officials seeking documents about registration and finances.  The offices of two German think tanks have also been searched by police, prompting Berlin to warn that ‘hampering the activity of German foundations could inflict lasting damage on bilateral relations’.  The fact that more than 40 NGOs across Russia have been subjected to unscheduled audits in the past month, ‘reflects the intense nervousness of authorities over the fact that their popularity is falling’.  Authorities in Syktyvkar, the capital of Russia’s republic of Komi, have rejected a request for a gay-pride march on March 31.  Masha Gessen discusses gay parenting in Russia in a PRI interview.  Following accusations by Alexei Navalny that he has Israeli citizenship, in breach of a law which prevents dual nationalities for lawmakers, wealthy senator Vitaly Malkin has resigned from the Russian Federation Council.  The authorities have promised that large numbers of independent poll workers will help ensure transparent elections in Moscow and St. Petersburg until 2018, but what will happen in Russia’s regions?  Online hotel booking service Ostrovok.ru has attained $25 million in investments from a group of partners, including Yuri Milner, in what could be the biggest deal of its kind in Russia’s Internet travel industry.

British police have announced that a judicial inquiry into the death of former Russian oligarch Boris Berezovsky will open on March 28.  Berezovsky was the ‘most highly placed con man in history’, says Yulia Latynina, but not one without his uses for the Kremlin, says Vladimir Ryzhkov.  The Washington Post offers a list of other murky Russia-connected incidents on U.K. soil.  In a new twist in the Washington-Moscow adoption scandal, a teenager adopted by an American couple has returned to Russia claiming abuse by his adoptive parents.  Hermitage Capital Management Ltd.’s Russia fund, once the employer of lawyer Sergei Magnitsky, has been closed as its beleaguered co-founder William Browder faces libel charges in London and tax evasion in Moscow.  Consortiums backed by Washington and Moscow are in fierce competition for a contract worth around $10 billion to construct two additional reactors for the Czech Republic’s Temelin nuclear power station.  Gazprom will buy a 20% stake in Total’s gas fields in Bolivia.

Russia and South Africa have passed a joint declaration on the establishment of a strategic partnership following talks held in Durban between President Vladimir Putin and South African President Jacob Zuma.  Moscow will cooperate on the construction of nuclear power plants in South Africa, whilst the latter will offer a maintenance service center for Russian helicopters.  Whilst welcoming the idea of a BRICS development bank to counter the World Bank and IMF, Finance Minister Anton Siluanov says more time is needed to develop ‘its mechanisms‘.

PHOTO: Russian President Vladimir Putin walks during a welcome ceremony on his arrival in Durban, South Africa, March 26, 2013. Vladimir Putin is on a working visit and set to meet with South African officials on Tuesday before attending a meeting with the leaders of Brazil, Russia, India and China (BRICS) during an Africa Dialogue Forum in Durban on Wednesday. (RIA-Novosti, Alexei Druzhinin, Presidential Press Service,Pool/ Associated Press)