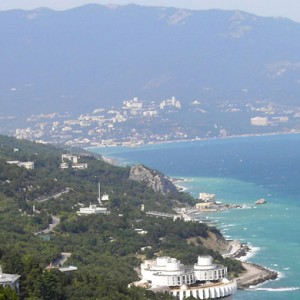 A new documentary broadcast on Rossia-1 dedicated to 15 years of Putin in power has seen the Russian leader accuse the U.S. of assisting separatists in the North Caucasus in the early 2000s.  In the documentary, Putin also described the annexation of Crimea as a ‘historical justice‘.  A monument to the ‘little green men’ (Russian special operations forces) who oversaw that process is being constructed in Russia’s Far East as part of Victory Day festivities.  Russian propaganda ‘may be more dangerous than any military’: such is the U.S. state department’s verdict on the information war.  The New York Times revisits last year’s story of Russian hackers who were able to access President Barack Obama’s unclassified e-mail and notes that the security breach was ‘far more intrusive and worrisome than has been publicly acknowledged’.  The period of bridge-building witnessed in Eastern Europe just a few years back seems to have ended, says The Independent, and been replaced by a set of walls, inspired by the Ukraine conflict.  The Russian military has begun to construct a railway line that would bypass Ukraine on its way from northern to southern Russia.  Poland has denied entry to Russian biker gang the Night Wolves, who hoped to ride through the country as part of Victory Day celebrations, prompting indignation on the part of the Foreign Ministry.  The gang’s leader, ‘the Surgeon’, has dismissed the move as ‘anti-Russian hysteria’.

It appears that following a meeting between President Putin and his French counterpart Francois Hollande on the sidelines of ceremonies in Yerevan commemorating the 100th anniversary of Armenian genocide, the two sides are closer to reaching an agreement on cancelling the $1.3 billion Mistral warship deal.  Tensions over Ukraine did not overshadow the cooperative atmosphere at the meeting of the Arctic Council at which member states, among them the U.S. and Russia, discussed oil spills and climate change.  Russia’s representative, the minister of natural resources and the environment noted, ‘there is no room here for confrontation or for fear mongering’.  There is, however, considerable cause for concern about Arctic ecology, says the Huffington Post, given that Greenpeace estimates the volume of all Russian spills at six million tonnes per year, six times the volume of the Deepwater Horizon spill in the Gulf of Mexico.  The oil wing of gas producer Gazprom, Gazprom Neft, plans to more than double oil output this year at the Prirazlomnoye field, which is Russia’s only Arctic offshore oil project.

Finance Minister Anton Siluanov has expressed concern that Russia could race through the entirety of its emergency Reserve Fund in as little as 18 months if it does not keep a close eye on spending.  The cost of one of the nation’s staple foods – the humble cabbage – has almost tripled in less than six months due to inflation.  A group of women have fallen foul of the authorities after posting a video in which they performed a twerking dance in front of a Second World War monument in Novorossiysk, which has resulted in the sentencing of one participant, an 18 year old, to 15 days of administrative arrest for petty hooliganism.  The mother of the sixth dancer, who is under 16 years old, has been subject to a fine for ‘failing to instill moral development’ in her daughter.  The Guardian examines the routine harassment experienced by the heads of NGOs whose enforced acceptance of the ‘foreign agent’ designation means ‘you are persecuted as a national traitor’.

PHOTO: The scenic coastline of the Crimea region. (Wikicommons)