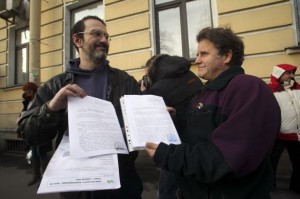 Having dropped criminal charges against the 30 Greenpeace activists who have spent two months in jail for an Arctic oil rig protest, the Russian authorities have issued exit visas to seven members of the group which will allow them to leave the country.  It is anticipated that by the end of today, all members of the Arctic 30 will have received clearance to leave Russia.  The motives for the release of Mikhail Khodorkovsky are not all they appear to be, argues this commentator, whilst this one ponders how much of the Yukos founder’s fortune remains.  Russia’s Supreme Court will review the two sets of convictions against him which could see a $520 million tax claim against the former oil billionaire overturned.  The court may also consider reducing the jail term imposed on Khodorkovsky’s business partner Platon Lebedev, who was also sentenced to 10 years in prison.  Nadezhda  Tolokonnikova and Maria Alekhina of Pussy Riot have been reunited after their two years in separate jails  and reiterated their plans to work to secure help for prisoners.  Tolokonnikova has revealed some of the disturbing  experiences she endured in a Mordovian prison.

The Independent has an in-depth examination of the possibility of terrorism blighting the Sochi Olympics.  Plans are apparently afoot to re-galvanise Russia’s lacklustre space sector.  The board of Russian potash producer Uralkali has named Dmitry Osipov its new CEO.  Syria and Russia are set to cooperate in energy exploration in the Middle Eastern country’s territorial waters off the Mediterranean coast, in a 25-year deal. President Putin has been found to be the most popular politician of the year in a recent poll, with Defense Minister Sergei Shoigu coming second and Foreign Minister Sergei Lavrov third.

Belarus looks set to receive an additional $2 billion in 2014 in loans from the Kremlin.  Russian health officials say the ban on products of Ukraine’s Roshen confectionary will be lifted early next year.  Following a meeting of the Supreme Eurasian Economic Council, President Putin has said that Armenia and Kyrgyzstan are nearly ready to join the customs union.

A plane has crashed in Siberia, killing all nine people on board.  A Reuters poll of 15 economists has gloomy predictions for Russia’s economy over the next year.