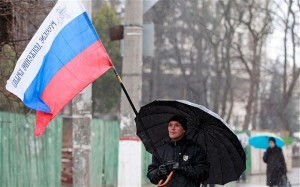 Armed men, believed to be Russian officers, have seized control of two airports in the Crimea region in what Ukraine’s interior minister has labelled an ‘armed invasion‘.  These charges have been vociferously denied by Russia.  In an apparent conciliatory gesture, President Putin has instructed his government to continue talks with Ukraine on economic and trade relations in consultation with Western partners.  With Ukraine in mind, deputies from A Just Russia intend to submit a bill to parliament that would ease the process of new territories joining the Russian Federation, by way of referenda or parliamentary decision.  The head of the Federation Council international affairs committee, Igor Morozov, visiting Crimea, says that a decision to hold a referendum ‘is not separatism‘, but is ‘simply the granting of broader powers to the peninsula, not only political, but also economic ones‘.  A bill to facilitate the procedure of granting Russian citizenship to Ukrainian nationals may also imminently be signed.  Reports have emerged that wanted former Ukrainian President Viktor Yanukovych landed at a military airport in southern Russia, escorted by fighter jets, on Thursday night, having been granted protection by the Kremlin.

With the closure of news agency Ria-Novosti looming, its employees apparently remain in the dark as to their future job prospects.  The Investigative Committee has detained billionaire political leader Gleb Fetisov after he ramped up his anti-Kremlin campaign.  The Committee’s chief, Alexander Bastrykin, has announced that a strategic priority for this year will be preventing graft during the planned privatization of state assets, which is expected to generate $31 billion.  Apparently seven army generals and admirals were subject to criminal probes on corruption-related charges last year.

Russian stocks are taking a beating as trouble in Ukraine continues. The ruble is falling dramatically – the silver lining being that this may boost revenues to the Russian treasury by $10 billion.  The Finance Ministry is celebrating a leap in foreign direct investment in 2013.  Over the same period, steelmaking powerhouse Severstal has reported a drop in profits of nearly 90%.

PHOTO: A man holds a flag with the words reading, ‘Russian movement of Crimea’, near the Crimean parliament building in Simferopol, February 27, 2014. (REUTERS)