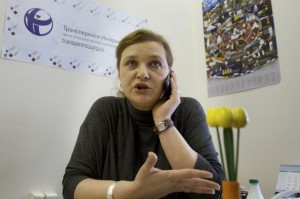 The Moscow offices of Human Rights Watch, corruption watchdog Transparency International and the Kazan-based advocacy group Agora are the latest organisations to be searched by investigators looking for tax records in a crackdown on civil society described as ‘unprecedented in scope‘.  ‘This is the planned destruction of the NGO sector in Russia’, said Lev Ponomarev, head of For Human Rights, who along with Agora chief Pavel Chikov, has been summoned for questioning.  EU high representative Catherine Ashton said the raids formed part of a trend that is ‘deeply troubling‘.  Legal experts called to duty by the Kremlin’s Human Rights Commission to review the Khodorkovsky case have been re-paid for their public service with probes into their financial background.  The organiser of a thwarted gay pride march in the town of Syktyvkar was reportedly attacked by a local neo-Nazi after the city announced it would ban the parade.  Novaya Gazeta has alleged that Favel Durov, the CEO of popular social network Vkontakte, cooperated with the FSB in the censoring of online opposition voices during the December 2011 period of unrest.  Prime Minister Medvedev is offering oppositionists the opportunity to express their views at Civil University, United Russia’s new educational project.

Rescuers have found one miner dead in the Evraz-owned Osinnikovskaya mine in the Kemerovo Region following a recent flooding; four miners remain missing.  Russian gas exports to Serbia may double within ten years, says Gazprom.  Bangladesh has plans to purchase 24 Yak-130 Mitten jet trainers on $1 billion credit from Russia.  The Kremlin plans to maintain a military hardware presence in Afghanistan after the withdrawal of NATO troops, in order to assist in maintaining stability.

A new report by research firm Roubini Global Economics has suggested that a lack of structural reforms is hampering Russia’s financial growth.  With Cyprus losing its shine, wealthy Russians are apparently flocking to New York to invest their fortunes.  Valentina Matviyenko, the speaker of the upper chamber of the Russian parliament, has said that a number of Federation Council members are willing to resign if a bill banning officials and members of parliament from holding accounts in foreign banks comes to pass.