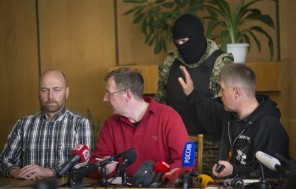 Pro-Russian rebels in the Eastern Ukrainian town of Slaviansk have taken eight OSCE monitors hostage, one of whom they have now freed for medical treatment, alleging that they are Western spies.  Kiev has blamed the Kremlin, which has pledged to take all possible steps to secure the release of the detainees, for the events.  Four Pro-Russian separatists have seized control of the offices of regional state television in Donetsk with the intention of switching coverage to Russian channels.  RIA-Novosti has obtained satellite photos which show an apparent buildup of Ukraine’s military weapons and equipment on the border with Russia.  Moscow has denied that Russian warplanes violated Ukraine’s air space, after reports surfaced that Russian planes traversed the zone multiple times.  A belligerent Foreign Ministry has vowed retaliation for the loss of five Russian lives on Friday and sharply criticised U.S. Secretary of State John Kerry for his stance on Ukraine and derogatory comments about Russian television.

The NATO Information Office in Moscow may cease operations in response to the alliance’s decision to suspend cooperation with Russia over the Ukrainian crisis.  German Chancellor Angela Merkel has reportedly castigated President Putin for failing to ensure that the Geneva accord be implemented.  Leaders of the G7 have agreed to launch more sanctions.   This comment piece argues that Russia’s motivations in the Ukraine crisis ‘remain under-examined.’

Prime Minister Medvedev is fighting to keep vodka cheaper, for reasons explained here.  State Duma Deputy Yelena Mizulina wants to have the practice of surrogacy outlawed as it is, in her view, an affront to tradition family values.  The State Duma has won accusations that it is imposing a state ideology after approving a bill criminalizing ‘spreading lies‘ about the Soviet Union’s role in World War II.  Zoologist Suren Gazaryan, who has won a $150,000 Goldman award, talks to the Guardian about the perils of criticising the ecological fall-out Russian state projects.

PHOTO: Vacheslav Ponomarev, the self-proclaimed mayor of Slovyansk, right, speaks to a pro-Russian gunman, as two foreign military observers look to each other during a press conference in city hall, of Slovyansk, Eastern Ukraine, Sunday, April 27, 2014. (Alexander Zemlianichenko/Associated Press)