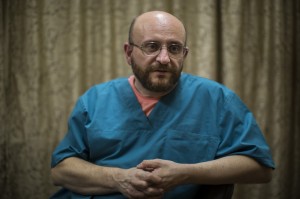 A 12-year-old boy and a 55-year-old woman have been killed by shelling in the separatist stronghold of Donetsk, in Ukraine’s east, despite the ceasefire agreement.  A patrol of the Special Monitoring Mission of the OSCE has also been fired upon in the south-east of the country.  President Putin has reportedly had a ‘constructive talk‘ with Ukrainian counterpart Petro Poroshenko, the first evidence of dialogue between the two men in almost a month.  A Levada poll has found that a majority of Russians believe their country’s troops are not fighting in eastern Ukraine, but nearly 50% would be glad if it turned out they in fact were.  War, this article suggests, has consistently done wonders for Putin’s popularity ratings.  Notre Dame Cathedral in Paris has received a gift from Russia in the form of a large Christmas tree, a present which, Russia’s ambassador to France says, has nothing to do with the thwarted Mistral warship deal.  France has chosen to award Lyudmila Ulitskaya, a Russian novelist highly critical of Moscow’s Ukraine policy, the Legion d’honneur.

The ruble has fallen to record lows against the dollar and euro following a decision by OPEC not to cut crude oil output.  Russia’s oil tsar, Rosneft CEO Igor Sechin has said that although oil prices could fall below $60 by mid-way through next year, the company’s activities will not be affected due to the ‘safety margin‘ provided by the company’s low net production costs.  He did not mention the fact that Rosneft reportedly owes about $60 billion to banks and bondholders, ‘making it more indebted relative to earnings than any large oil producer apart from Brazil’s Petroleo Brasileiro SA‘.

The Defense Ministry has signed a $630 million contract with a major state-owned aircraft manufacturer to modernize over 50 of its high-speed MiG-31 interceptor jets.  The head of the Ministry’s Armaments Department has stated that Russia is ahead of schedule in modernizing 30% of its military hardware.  Could Soviet-era nuclear missile trains return to service?

Former billionaire and onetime Kremlin crony Sergei Pugachyov has been put on Interpol’s wanted list for ‘misappropriation or embezzlement’, two months after commenting, ‘today in Russia there is no private property. There are only serfs who belong to Putin‘. The Washington Post covers a new faction of discontented citizens in Putin’s Russia: doctors who are losing jobs as a result of the President’s sweeping healthcare reforms.

PHOTO: In this photo taken on November 20, 2014, Dr. Semyon Galperin speaks during an interview with The Associated Press at Hospital 11 in Moscow, Russia. Galperin’s job is being eliminated as part of a sweeping reform in which at least 28 Moscow hospitals are to be closed and up to 10,000 medical staff fired. (Alexander Zemlianichenko/Associated Press)