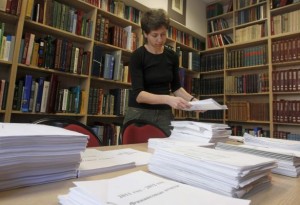 Vladimir Putin has described the latest spate of raids on NGOs as ‘routine measures‘, whilst noting that the audits should be monitored by the presidential ombudsman for human rights to ensure there are no ‘excesses‘.  The U.S. has compared the ‘unprecedented wave of inspections‘, of which the Moscow Helsinki Group, Russia’s oldest human rights organization, is the most recent victim, to a witch hunt.  This article considers how long Washington’s Magnitsky sanction list will turn out to be.  Following the raid on the NGO he runs, three administrative cases have been launched against veteran human rights activist Lev Ponomaryov.  Embattled rights watchdog Memorial is a possible contender for a Nobel Peace Prize.  President Vladimir Putin has hosted a conference charged with reviving the Kremlin-sponsored All-Russia People’s Front.  The President has proposed limiting golden parachute payments for executive managers.  Corruption continues to blight Russia’s prospects of a credit-rating upgrade, says Moody’s.  ‘Rich Russians have not needed to fight for the rule of law at home to protect their capital. They have chosen the much simpler option of exporting their money and taking advantage of the rule of law in the West’.

President Putin has ordered the launch of unplanned large scale naval exercises in the Black Sea in an attempt to assert Russia’s presence in the zone.  Kyrgyzstan apparently has plans to reduce its rebroadcasting of Russian television shows.  Thirteen BMP-3 infantry fighting vehicles have been delivered to Venezuela, making good on Moscow’s promise to cooperate with the state regardless of who succeeds deceased Kremlin ally Hugo Chavez.  In a veiled critique of the White House, Moscow has decried increased military activity near North Korea.  The Kremlin is also unhappy with the Arab League’s decision to accept the Syrian opposition as the country’s representative to the organization.

A British inquest into the death of oligarch Boris Berezovsky has reported that he was found with a ‘ligature around his neck‘.  The authorities have not ruled out foul play.  Brian Whitmore explains how the once-mighty oligarch’s legacy is manifest, in finely tuned form, in Putin’s Russia.