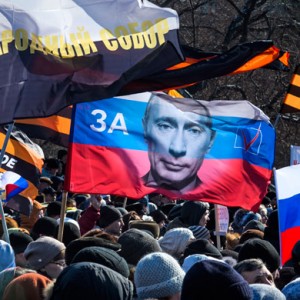 Boris Mezdrich, the director of a Siberian staging of Wagner opera Tannhauser has been fired by the Culture Ministry, after the production generated protests among followers of the Russian Orthodox Church.  Activist Ilya Yashin has pledged to continue the investigation opposition politician Boris Nemtsov was undertaking at the time of his murder into the participation of Russian troops in the conflict in eastern Ukraine.  The authorities in Moscow are being urged to install a permanent memorial to the slain politician, as the makeshift tribute at his murder site has reportedly been cleared a second time.  Prosecutors in Warsaw have asked that Russian authorities question two Russian air-traffic controllers whom it accuses of contributing to the 2010 plane crash that killed then Polish President Lech Kaczynski.  Finance Minister Anton Siluanov has stated that Russia will not consider restructuring its $3 billion holding of Ukrainian debt, on the basis that Russia is facing its own financial woes, and ‘secondly, why should we have to consider the question of restructuring?’  Russia’s GDP fell by 2.3% year-on-year in February compared with a 1.5% decline in January, says a new Economy Ministry report.  A new Levada poll has found that more and more Russians believe in an economic system founded on government planning rather than ‘private property and market relations’.

Russia has announced it will join the China-led Asian Infrastructure Investment Bank.  Amid western sanctions, ‘Russia wants to get its alliances straight’ says this commentator on the decision.  Vladimir Putin has pledged to offer a $1.7 billion capital boost to encourage the production of passenger airliners.  Space agency Roscosmos will cooperate with NASA in the construction of a new space station once the current ISS has terminated its cycle.  Russia claims that despite rumours, it has not held negotiations on leasing a dozen supersonic bombers to Argentina, but would be willing to consider such a deal.  President Putin has spoken out against foreign intervention and in favour of an independent Palestinian state in an address to the Arab League in Egypt.

Bloomberg reports on the battle for the top spot among the Russians on its Billionaires Index.  This article offers a swan song to the last Crimean Tatar-language television channel in the world, whose future, now under Russian control, looks uncertain.  A new poll suggests that Russians have paid heed to the President’s demands that citizens improve their health.