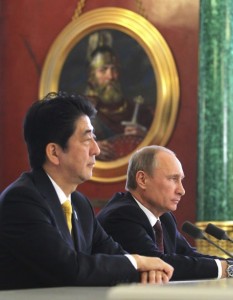 Aviation watchdog Rosaviatsia is urging Russia’s airlines to suspend its flights over countries caught in military conflicts, after reported ‘hostilities’ against a Russian passenger plane flying over Syria yesterday, where apparently ‘two ground-to-air missiles were fired at the plane and exploded in close vicinity to it.’  A spokesman for Vladimir Putin says that diplomatic relations with the U.S. have improved as a result of the Boston bombing.  President Barack Obama is currently discussing U.S. concerns about Syrian chemical weapons with Putin.  Russia and Japan have pledged to revive talks on resolving their long-term territorial dispute over the Kuril Islands, but neither side foresees a swift solution.  No major energy agreements were completed during Prime Minister Shinzo Abe’s visit to Moscow yesterday.  The Tajik embassy in Moscow has set up a support group to protect its citizens from harassment when crossing Russian borders, blaming ‘certain state-run TV channels’ for ‘creating an atmosphere of hatred and intolerance toward Tajik citizens’.

Oil company Surgutneftegas has disclosed a cash pile of $29 billion.  Norilsk Nickel is to bail out two of its main shareholders who are struggling with their Olympic projects, after the Kremlin failed to respond to requests for tax breaks and loan subsidies.  Vladimir Putin’s rejection of calls for fiscal stimulus will ‘limit Prime Minister Dmitry Medvedev’s options’, says this piece, but Medvedev insists that his government has implemented 73% of Putin’s presidential decrees since last May.  As the new head of the central bank, Elvira Nabiullina will have ‘ample room to boost lending and growth’; Bloomberg offers some strategies, including an overhaul of current refinancing strategies.  Four suspects have been detained on suspicion of embezzling $1 million in budget funds allocated for the maintenance of the Caspian Highway.  This report picks apart the fraud allegations against Alexei Navalny and businessman Pyotr Ofitserov.

This BBC report compares Soviet and present-day Russia, talking to both supporters and opponents of Vladimir Putin’s government; including Maria Baronova, a young mother and political protester who is awaiting trial for provoking unrest.  A team of international human rights groups have created a commission to investigate last year’s Bolotnaya Square protest.  Masha Gessen reports on the appeal last week for the release of Pussy Riot member Nadezhda Tolokonnikova, and, notably, its numerous legal failings.  The Independent discusses the case of former Russian official Elena Kotova, who was placed under internal investigation for corruption, and has since been committed to a psychiatric hospital.  Vladimir Putin vs. hairless cats?