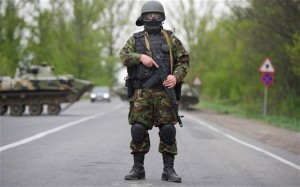 The Foreign Ministry has asserted that Moscow retains the right to respond to sanctions imposed by Washington, but cooperation between the two countries is still possible.  President Vladimir Putin has apparently stated that Russia does not consider a need for retaliatory sanctions against the West, but may reconsider the participation of Western companies in its economy, including energy projects.  Gazprom has warned that sanctions could potentially disrupt gas exports to Europe.  The sanctions and unrest in Ukraine are starting to affect some U.S. companies which are active in the region, says the Moscow Times.  Deputy Prime Minister Dmitry Rogozin has warned that the measures could affect the International Space Station, which is currently hosting U.S. astronauts.

Around 3,000 pro-Russian separatists have stormed the regional government HQ in the Eastern Ukrainian city of Luhansk and fired on police.  President Putin maintains there are no Russian military servicemen or security forces in Ukraine.  The Kremlin plans to spend between $22-$28.6 billion until 2020 on the development of Crimea and Sevastopol.  The Russian Foreign Ministry has had a profitable meeting with its Cuban counterpart.  One leading Russian scientist believes Russia can fully justify its territorial Arctic claims.

The Federation Council has approved tough new restrictions on bloggers and social-networking sites which will require poplaur bloggers to provide personal information to a government register.  At least three explosions have damaged a military ammunition depot located to the east of Russia’s Lake Baikal, prompting the temporary suspension of the Trans-Siberian railway.  Ten people have been killed.