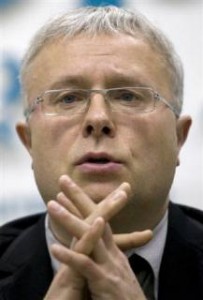 As Rupert Murdoch finds himself engulfed in the phone-hacking scandal which brought the News of the World to its disgraced closure, it is unsurprising that the media have turned to other British newspaper owners for their opinion on the debacle, which has revealed that News Corp may possibly be complicit in a wide range of iniquitous, indeed criminal activities, from tapping the phones of murder victims to paying hefty bribes to the police for information.  Alexander Medvedev is the owner of London tabloid the Evening Standard and broadsheet the Independent, and is also no stranger to the world of bribery and corruption from his numerous troublesome entanglements in Russia.  A few days ago his son Evgeny Lebedev, chairman of Independent Print Ltd, expressed his dismay at the tactics employed by the British media.  As speculation mounts as to who might purchase any other of Murdoch’s publications should he have to relinquish them and scrutiny from the British government increases, father Alexander gave Reuters his insight into the scandal, pointing to the slide from incisive investigative journalism, the cornerstone of a free press, to exploitation and corruption:

When asked if he thought Murdoch knew, he said: “Hopefully he did not know.”

On whether his own journalists hack phones, he said: “I don’t think they do.”

Murdoch has moved quickly in recent days to try to draw the sting from the rapidly escalating scandal, first closing the 168-year-old tabloid at the heart of the problem and then referring the takeover deal to a lengthy commission inquiry.

“He is an interesting combination of a very talented individual who did a lot to support the freedom of press, but somehow probably contrary to what he wished, he gained a lot of power and influence and money,” Lebedev said.
“Becoming that influential he automatically attracted a lot of politicians courting him — it is not necessarily that he courted them. So actually who is more responsible in Britain for this cohesion between the politicians and Murdoch?”

Russia’s leading television channels are all dominated by the state and fete both President Dmitry Medvedev and his mentor, Prime Minister Vladimir Putin, though Moscow’s small circulation daily newspapers and vibrant blogosphere frequently lampoon Russia’s leaders and uncover allegations of official corruption. But their reach is limited.

Lebedev, who has fought for media freedoms in Russia, cautioned that Britain should be careful to ensure reporters were allowed to continue proper investigative journalism.

“Do not throw the baby out with the bathwater,” said Lebedev. “Tabloids do have a part to play in society.”