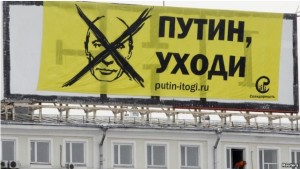 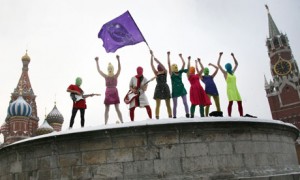 Russia is a veritable rainbow of imaginative protest actions in the run-up to next month’s elections (which the unpopular Vladimir Putin is certain to win), as activists try to come up with eye-catching ways of thumbing their noses at the Kremlin and drawing attention the possibility of alternative futures.  Opposition group Solidarity were responsible for the enormous yellow banner reading ‘PUTIN GO AWAY’, which appeared atop a building directly opposite the Kremlin yesterday before being swiftly taken down by police. ‘We think 12 years under Putin’s rule is more than enough,‘ said one Solidarity activist.

There’s also a piece in today’s Guardian on Pussy Riot, an all-girl punk outfit who managed to get through a rendition of their song ‘Putin’s Got Scared’ in Red Square last month before being hauled off by police (click for raucous audio/video).  The group keep their identities hidden ‘[to] show we can be anybody‘:

“Putin and his team are behaving so rudely, and the people aren’t ready to react in the same way – they want all these protests to be sanctioned,” said Tyurya. “But that’s what’s needed when you’re fighting an illegitimate government. They’re basically occupiers, they don’t have the right to be here – why should things be agreed with them?”

There was also a brilliant compilation of various dissident Russian artists’ work by RFE/RL, who give an overview of the range and extent of the current protest mood with viral videos, images and some of the more attention-grabbing stunts performed by opposition groups in recent months.  One of Pussy Riot’s members tells the Guardian that, in the current climate, Russia needs ‘many different kinds‘ of protests: the opposition are certainly not disappointing on that front.