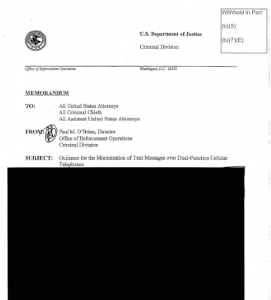 Any citizen who voted for President Barack Obama hoping for some change and improvement to the culture of secrecy of his predecessor should be sorely disappointed. According to a new data analysis by the Associated Press, last year the Obama administration invoked more exceptions to the Freedom of Information Act than any other government in the nation’s history. Way to lead by example, guys.

In category after category — except for reducing numbers of old requests and a slight increase in how often it waived copying fees — the government’s efforts to be more open about its activities last year were their worst since President Barack Obama took office.

In a year of intense public interest over the National Security Agency’s surveillance programs, the government cited national security to withhold information a record 8,496 times — a 57 percent increase over a year earlier and more than double Obama’s first year, when it cited that reason 3,658 times. The Defense Department, including the NSA, and the CIA accounted for nearly all those. The Agriculture Department’s Farm Service Agency cited national security six times, the Environmental Protection Agency did twice and the National Park Service once. (…)

Citizens, journalists, businesses and others last year made a record 704,394 requests for information, an 8 percent increase over the previous year. The government responded to 678,391 requests, an increase of 2 percent over the previous year. The AP analysis showed that the government more than ever censored materials it turned over or fully denied access to them, in 244,675 cases or 36 percent of all requests. On 196,034 other occasions, the government said it couldn’t find records, a person refused to pay for copies or the government determined the request to be unreasonable or improper.