Backing and Backtracking on Arab Spring 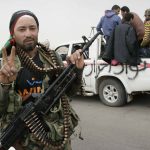 The Arab Spring has certainly given the petrocratic authoritarian regimes of the former Soviet bloc much to think about. ‘The events in North Africa opened our eyes to many things’ concurs Nikolai Bordyuzha, general secretary of the Collective Security Treaty Organization, in an interview he gave to Bloomberg on the sidelines of CSTO conference in Dushanbe last week.  ‘We must reflect on what happened there and develop means of defense.’  In other words, solder military ties between the CIS countries in order to quash any rumbles of pan post-USSR revolt.  Russia’s new deal to extend the lease of its military base in Tajikistan is just one cog in that machine.

However the lessons of the Arab spring do not remain restricted to the small matter of cracking internal dissent, any manifestations of which the regimes of the CIS are well-versed in dismantling.  As Nicholas Noe and Walid Raad have pointed out below, the issue of Russia’s uncertain attitude towards regime collapse in Libya and near collapse in Syria, is proving to be a major foreign policy challenge, which could effect Russia’s ambit of influence more broadly:

George Semaan another columnist in Al-Hayat, said that even if Assad manages to stay in power, Russia is in serious danger of “losing” the Middle East.

“It seems clear,” Semaan wrote, “that Moscow did not absorb the shock which affected it” as a result of the Arab Uprisings. He said Russia has tried and is still trying to rebuild its footprint, “especially in the Middle East, after it lost most of Europe.” And now it is acting “as though the Middle East were the only arena left for it to compete and engage in trade-offs with Europe and America.”

In a column headlined “Russia and Syria, and the Eyes of the Dog,” Abdel-Rahman al-Rashid was even less restrained. Russia, he said “views the region through the eyes of a jackal, the carnivorous animal that lives on dead bodies and the remnants of the prey of other animals.”

Had Russia’s stance towards the events in Libya and Syria “been positive from the beginning,” al-Rashid wrote, “perhaps it would have spared the two regimes with the least amount of confrontations by pushing them towards reform, since this would have been better for them than a complete uprooting.”

But Russia is well known for positions that “nearly always” support “evil regimes,” he said.

With Iran and Russia the focus of so much consternation, the Obama administration, it seems, could at least take comfort that its “leading from behind” approach might be saving it from the regional commentators’ usual wrath — at least for now.