Belkovsky on Prisoners and the Potash War

We came across this amusing op/ed by Stanislav Belkovsky in Moskovsky Komsomolets on the recent jailing of Uralkali CEO Vladislav Baumgertner in Belarus, and Russia’s interesting response, and thought a quick translation would be interesting.  Belkovsky tends to write with very dry sarcasm, so keep in mind his tone can be hard to follow for Western readers. 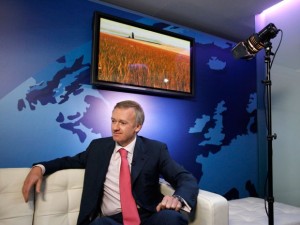 Russia’s peaceful foreign policy, which is a continuation of its effective internal politics, brings worthy fruits to the post-Soviet space and beyond.

The other day, the CEO of the giant Russian company “Uralkali” Vladislav Baumgertner was arrested in Minsk. This efficient manager came to Belarus at the invitation of Prime Minister Mikhail Myasnikovich for the negotiation of potassium trade. As you know, the problem going back in the old days is that “Uralkali” wanted to buy “Belaruskali”, forming together the largest fertilizer producer in the world. But the current owner of “Uralkali”, businessman Suleiman Kerimov, and the president of Belarus, Alexander Lukashenko, could not agree on the price. As a result, a long political and corporate war began. Over the course of this war, “Uralkali” first struck at the “Belaruskali” bringing down the global potash market. And in response Belarus sent the notorious Mr. Baumgertner to a KGB jail. And, according to some information, Mr. Kerimov, along with the Chairman of the Board of Directors of the “Uralkali”, the former head of the presidential administration Alexander Voloshin, should have been put to jail as well. But these gentlemen wisely did not arrive at the crucial negotiation in Minsk.

The first deputy Prime Minister Igor Shuvalov (they say to be very close to Suleiman Kerimov) responded that the behavior of the official Minsk “does not fit under any rules.”  Mr. Voloshin, who happily escaped the dungeon, made ​​it clear that prosecution and investigation would not solve economic disagreements. And the chief doctor of Russia, Gennady Onishchenko, once again started questioning the quality of Belarusian dairy products supplied to Russia. In addition, on September 1, Russia will cut oil supplies to Belarus on the “Friendship” pipeline (of course, due to urgent repairs), etc.

What do I want to say about all this?

First, of course, I sincerely sympathize with Vladislav Baumgertner as any person who is in such dramatic circumstances. But it is still not very clear what Shuvalov meant when said the situation did not “fit under any rules”. Those rules that the “Yukos affair”, the “Bolotnaya case ,” and the five-year sentence for Alexei Navalny for “Kirovlesa” case did not fit either? And does not it seem to Mr. Voloshin that it is the modern Russian elite that established a system to resolve commercial conflicts by means of prisons? Is there a need for any other examples or everything is clear to anyone by now? So it is not very appropriate to act as a moral and legal mentor of Russia in this situation.

Second, head physician Onishchenko is increasingly perceived in the outside world as a stupid Russian racy anecdote. Well, we already stopped Belarusian dairy products in 2009, so what? And we banned Georgian wine, mineral water “Borjomi”, which was not terrible and not dangerous once (2012) Borjomi valley plants came under the control of the Russian financial-industrial groups “Alfa Consortium.” And head doctor feared Ukrainian candy factory “Rochen” despite the fact that his fears were not shared with any other post-Soviet country. So all these major caused damage to the Russia’s reputation, and that’s it.

The main thing is that we just found out that the Union State of Russia and Belarus is a fiction and a bluff. We cannot speak of it as real politics and geopolitics. Although, of course, many observers would still be trying to do it for years demonstrating that relationships improve, and Lukashenko would be friends with Putin again.

And we also found out that Ukraine will not enter into a customs union with Russia, Belarus and Kazakhstan. The Premier Dmitry Medvedev (Russian Federation) and Nikolai Azarov (Ukraine) agreed during the negotiation in Moscow.

And no Russian threats for Ukraine are no longer working. Despite the fact that the Prime Minister Azarov does not freely speak any language other than Russian. Our economic authorities have even tried to arrange “china war” – to limit supplies of Ukrainian porcelain and earthenware. The result is a low-key neighborhood laughter clenched into the fist.

The conclusion is as follows: the post-Soviet world in its international political significance does not exist. Russia was left alone. From a regional power, Russia became just a big chip, stub, and remnant of our own empire.

But the major international triumph for the official Russia is, of course, the case of Edward Snowden.

Everything is pretty obvious. He is certainly not a keeper of terrible secrets. Well, he told us that the U.S. intelligence services listens, views and rattles the entire world. As if nobody, who is concerned, did not know! That’s why it is called the superpower to know everything using up-to-date technologies.

Apparently, once bored, Edward Snowden enlisted with Chinese intelligence. When the United States learned of this, and the Chinese have realized that Snowden does not bare any real benefit, they skillfully sent him on his way from China. After that, no country, including Cuba, agreed to host Snowden. None, except for Russia, which created itself a lot of problems out of the blue with no benefits – political, moral or even economic.

America pursues Snowden because of the principle that you cannot forgive traitors. Especially those, who use treason to acquire international fame.

More than that, Snowden-show possibly accelerated military decoupling of the Syrian crisis. After all, after the glorious asylum, the U.S. and its allies’ rhetoric on Damascus has become much tougher. And the fact of chemical attack by the forces of President Bashar al-Assad on the rebels was revealed right away.

It was necessary for Barack Obama, who have been criticized from all sides for a humiliating setback with Snowden, to show the fangs of American imperialism. So perhaps we can thank the Kremlin for fast-attack by the combined forces of the U.S., Britain and Turkey on Syria. Our Foreign Ministry’s statements that this attack is a challenge to the UN Charter are perceived as a joke.

It all is caused by incompetence of our state apparatus, which for many years did not need people to think strategically, instead it needed a gray, servile and thieving functionaries. But even more, it is caused by irresponsible elites, who believe that they will still have old Russia and they have nothing to worry about.